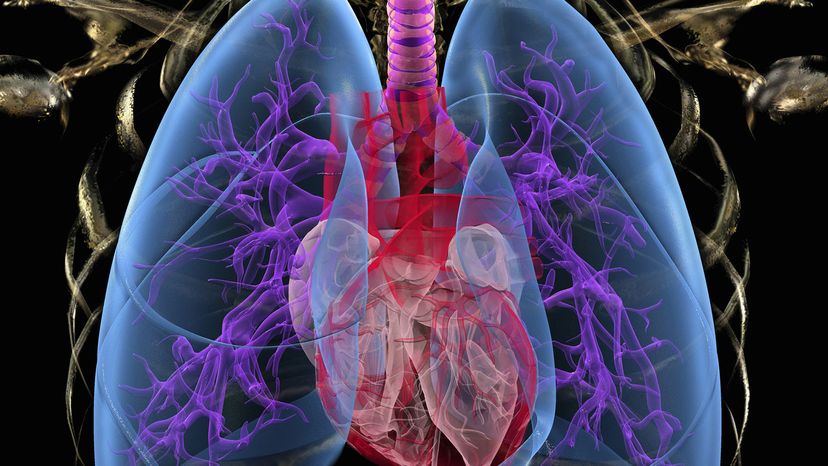 The heart and lungs work together to make sure your body has the oxygen-rich blood it needs. Callista Images/Getty Images

In this article, we will take a close look at how your lungs work and how they keep your body's cells supplied with oxygen and get rid of the carbon dioxide waste. We will explain some of the conditions and diseases that make breathing harder and cause the lungs to fail. We will also explain why you can't hold your breath for a long time and why you cough or hiccup.

Your lungs are located within your chest cavity inside the rib cage (see illustration below). They are made of spongy, elastic tissue that stretches and constricts as you breathe. The airways that bring air into the lungs (the trachea and bronchi) are made of smooth muscle and cartilage, allowing the airways to constrict and expand. The lungs and airways bring in fresh, oxygen-enriched air and get rid of waste carbon dioxide made by your cells. They also help in regulating the concentration of hydrogen ion (pH) in your blood.

When you inhale, the diaphragm and intercostal muscles (those are the muscles between your ribs) contract and expand the chest cavity.
HowStuffWorks

Where the Air Goes

At the beginning of the pulmonary capillary, the hemoglobin in the red blood cells has carbon dioxide bound to it and very little oxygen. The oxygen binds to hemoglobin and the carbon dioxide is released.
HowStuffWorks

Anatomy of the Lung

Breathing and the Autonomic Nervous System

You don't have to think about breathing because your body's autonomic nervous system controls it, as it does many other functions in your body. If you try to hold your breath, your body will override your action and force you to let out that breath and start breathing again. The respiratory centers that control your rate of breathing are in the brainstem or medulla. The nerve cells that live within these centers automatically send signals to the diaphragm and intercostal muscles to contract and relax at regular intervals. However, the activity of the respiratory centers can be influenced by these factors:

Of these factors, the strongest influence is the carbon dioxide concentration in your blood and CSF followed by the oxygen concentration.

Sometimes the respiratory centers go temporarily awry and send extra impulses to the diaphragm. These impulses cause unwanted contractions (hiccups). The same thing happens in unborn children; many pregnant women often feel their babies hiccup. This happens because the respiratory centers of the developing child's brain are working just like those of an adult even though they are not yet breathing air.

There are many common conditions that can affect your lungs. Diseases or conditions of the lung fall mainly into two classes — those that make breathing harder and those that damage the lungs' ability to exchange carbon dioxide for oxygen.

Diseases or conditions that influence the mechanics of breathing:

Diseases or conditions that minimize or prevent gas exchange: