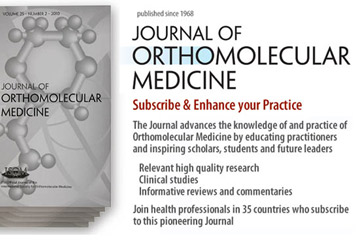 Originally published in 1967 as the Journal of Schizophrenia, the Journal of Orthomolecular Medicine is controversial and not widely accepted by the mainstream medical community.
Screenshot by HowStuffWorks.com

The mainstream medical community was discounting claims made by practitioners of orthomolecular medicine and calling the therapies dangerous even before Dr. Pauling coined the name. For example, Dr. Max Gerson, a doctor who claimed in the 1920s that he could cure cancer and other diseases through a special program called Gerson Therapy, was quickly discredited by organizations like the American Medical Association, the National Cancer Institute, and the American Cancer Society. Several people died as a result of his therapy. A more recent case took place in South Africa in the mid-2000s. Dr. Matthias Rath claimed that the antiretroviral drugs used to treat patients with AIDS were poisonous and his vitamin supplements could cure the disease. He conducted illegal vitamin trials on AIDS patients there, after which many of them died. Rath was criticized by medical organizations worldwide and faced lawsuits.

While those are extreme examples, critics state that there is no evidence, other than anecdotes from patients, to support the vast majority of claims made by orthomolecularists. Their therapies have generally not been submitted for independent rigorous, scientific testing, while their own studies do not follow traditional procedures, are too small and are inconclusive. Orthomolecularists also use diagnostic tests that are not accepted as valid by the scientific community, such as analyzing strands of the patient's hair to determine levels of specific vitamins and minerals. Overall, orthomolecular medicine is considered unscientific, unsound and potentially dangerous by mainstream medicine.

The community of orthomolecularists claim that nobody has died in the past 10 years from taking vitamin supplements, while the same can't be said for conventional drug therapies. They also point to the fact that some vitamins are used in megadoses as treatment for certain conditions in mainstream medicine. However, many also believe that mainstream medicine is suppressing their findings. Dr. Abram Hoffer, an orthomolecular psychiatrist, states that medical professionals and their organizations will "protect their hard earned orthodoxy no matter what the cost to their opponent physicians or to their patients" [source: Hoffer]. The Journal of Orthomolecular Medicine was supposedly founded because researchers had a difficult time publishing in mainstream medical journals, and orthomolecularists claim that some of their colleagues have lost their medical licenses for their views.

Whether orthomolecular medicine presents viable treatment options for disease or it's just quackery and snake oil, it doesn't appear to be going anywhere after more than 40 years in existence. As for that vitamin C you're taking to help you deal with the common cold, it all depends on who you believe.

10 Supplements That Do Not Work as Advertised
Can vitamin C help prevent dengue fever?
10 Old Wives' Tales About Your Health