What Is Alice in Wonderland Syndrome? 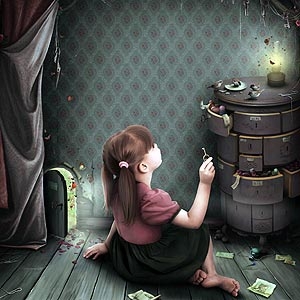 Also known as Todd’s syndrome, Alice in Wonderland syndrome (AIWS) is a neurological condition that distorts perception, causing disorientation and a warping of the senses [source: PubMed]. AIWS can be triggered by an abnormal amount of electricity in the body, causing a change in blood flow in the brain. Signals sent from the brain to the eyes are disturbed resulting in a variety of symptoms including: hallucinations, lost sense of time and an altered self-image where certain body parts appear disproportionate to the rest of the body.

Often diagnosed in childhood, this condition can often leave sufferers feeling like Lewis Carroll’s character Alice lost in her dreams. Though many people grow out of this condition by their teens, some continue to experience these symptoms throughout life, especially at the onset of sleep.

AIWS is commonly caused by migraines, headaches, intoxication from hallucinogens, brain tumors or contraction of the Epstein-Barr virus (EBV) [source: Centers for Disease Control]. Frequently a precursor to mononucleosis, EBV can cause fever, sore throat, swollen spleen and lymph nodes. In the initial phases of EBV, sufferers can experience these hallucinogenic symptoms.

Another common cause is temporal lobe epilepsy (TLE) [source: epilepsy.com] where a seizure occurs in the temporal lobes. The reactions to TLE are varied, with some experiencing a euphoric state with great pleasure to those experiencing intense fear and paranoia.

Besides getting plenty of rest, common treatments for AIWS are similar to those for migraines: beta blockers, anticonvulsants, antidepressants and calcium channel blockers [source: American Academy of Family Physicians]. Alternative therapies include group therapy and a strict diet.

For sufferers of temporal lobe epilepsy, treatments include: