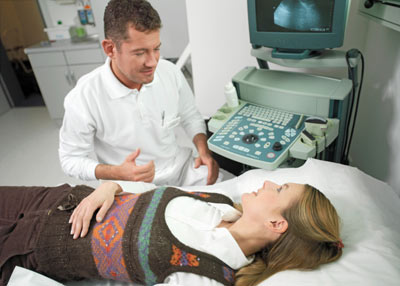 An ultrasound can reveal a missed miscarriage.
Rayman/Digital Vision/Getty Images

Health care providers use the blanket term "miscarriage," so it may be surprising to learn that there are several different types.

Threatened: Sometimes a woman will experience vaginal bleeding in the early months of pregnancy. This bleeding is usually mild and may be accompanied by cramps or backaches. But the cervix remains closed and, as the name suggests, the miscarriage is not successful. In fact, the majority of pregnancies continue successfully after a threatened miscarriage.

Inevitable: This occurs when a woman experiences vaginal bleeding in conjunction with back or abdominal pain. In this type, the cervix is open, or dilated, and some of the uterine membranes may be ruptured. In these cases, the miscarriage has already begun.

Incomplete: An incomplete miscarriage results when only part of the pregnancy has been miscarried, leaving some products of conception in the womb. Symptoms often include heavier bleeding and severe abdominal pain after tissues have expelled from the womb. An ultrasound usually reveals the remaining tissue.

Complete: A complete miscarriage includes the expulsion of all products of conception, including the fetus and the placenta. While symptoms are similar to those seen in incomplete miscarriages, they subside quickly after the tissue is expelled. An ultrasound is often performed to ensure that no tissues remain and the womb is empty.

Missed: Basically, this is a miscarriage that the woman wasn't aware even happened. In these cases, there is embryonic death but the woman's body does not expel the tissues. So, cramping, bleeding and back aches are not present, and the only symptoms are loss of pregnancy symptoms such as nausea, weight gain and breast tenderness. These types of miscarriages are generally discovered when the fetal heartbeat isn't located during a routine doctor's visit.

Recurrent: Only about 1 percent of women have three or more first-trimester miscarriages [source: Royal College of Obstetricians and Gynaecologists].

Septic: A septic miscarriage can risk the health, and sometimes life, of the expectant mother. This type of miscarriage occurs as a result of either a missed or incomplete miscarriage. After the miscarriage, some or all of the remaining pregnancy tissue becomes infected. This tissue then infects the uterus, which can result in the spread of the infection throughout the body. Symptoms of this type of miscarriage can include vaginal bleeding, abdominal pain, fever, chills, exhaustion and a thick, foul-smelling vaginal discharge.