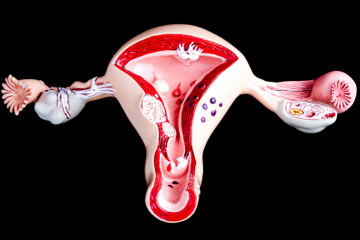 This model of the uterus and ovaries shows common uterine problems, including endometriosis, adhesions, fibroids and cysts, but adenomyosis is rarely represented on such models, perhaps because the cause of the condition is not fully understood.
©iStockphoto.com/ericsphotography

When you want to get pregnant, every month that passes without a positive pregnancy test can seem like a lifetime. After all, more than 6 million American women get pregnant every year, so what's the problem [source: National Vital Statistics System]? The culprit is often impaired fertility, and one out of every six couples trying to get pregnant has trouble conceiving after a year of unprotected sex. About half of those couples will go on to conceive the old-fashioned way or with very minimal help, but the other half? The other half may find themselves struggling with conception or with carrying a pregnancy to term; these couples may need more testing and advanced fertility treatments [source: Taylor].

Fertility problems might manifest for a variety of reasons in both women and men, from health problems such as hormonal imbalances to habits such as smoking. Age is an important factor, as is diet and weight. But sometimes the reason why a woman can't get pregnant or isn't successful carrying a pregnancy to term has no explanation -- as many as 20 percent of couples with fertility problems never know the cause [source: Newton-Wellesley Hospital].

And then there are conditions that may or may not affect your fertility. One of those is adenomyosis.

Adenomyosis is what's called a structural gynecological disorder, just as fibroids, polyps and endometriosis are structural disorders (opposed to hormonal imbalance or inflammation) that could affect the reproductive system. It affects the endometrial cells in the lining of the uterus and the muscular layer of the uterine wall.

In theory, adenomyosis is a condition that can affect a woman's fertility if it develops during her childbearing years, but research is still preliminary, and questions about the impact of the condition on conception rates and pregnancy risks currently remain unanswered. Let's dive a little deeper into the cause and symptoms of adenomyosis.

When adenomyosis strikes, here's what's going on: A woman's uterus is lined with endometrial tissue (called the endometrium), and when a woman has adenomyosis, her endometrium is growing in the wrong place -- into the muscular layer of the uterine wall (called the myometrium). This abnormal growth may cause heavy menstrual bleeding (sometimes with blood clots called menorrhagia), pelvic pain, painful menstruation and severe menstrual cramps (called dysmenorrhea) and painful sex, as well as vaginal bleeding between menstrual cycles [source: Mayo Clinic]. Sometimes, the condition causes an abnormal mass called an adenomyoma to grow in the uterus. And yet, some women have mild symptoms such as tenderness or bloating in the pelvic region, and as many as 35 percent of those affected actually don't seem to have any apparent symptoms at all [source: Levgur].

And the cause behind the condition? Here's where things begin to get a little fuzzy.

Women who have gone through childbirth seem to be at a higher risk for developing adenomyosis, possibly due to inflammation in the lining of the uterus after giving birth. The risk also appears to increase for women who have given birth via cesarean section (c-section), terminated a pregnancy, undergone fibroid removal or had any other type of uterine surgery.

Current research is exploring a few possible causes behind the disorder, including uterine inflammation as mentioned above, invasive tissue growth and a theory known as developmental origins. The developmental origins theory suggests women with adenomyosis suffer from the condition because of how their uterus formed during fetal development. The invasive tissue growth theory suggests that when a woman undergoes uterine surgery, such as a c-section or a myomectomy to remove fibroids, cells from her uterine lining may unintentionally get pushed into the myometrium, triggering the condition.

Adenomyosis may also be hormone-triggered, an estrogen-dependent disorder caused by high levels of estrogen, progesterone, prolactin and follicle-stimulating hormone (FSH) circulating in the body. Women with the hormone-triggered version of the condition usually find it resolves itself once they hit menopause and their estrogen levels drop.

There are treatments for the condition, or at least ways to ease the symptoms.

What studies have shown is that adenomyosis occurs most often in women who are between 40 and 50 years old, at the very end of their childbearing years or beyond them, but as many as 15 to 25 percent of women who are still in their reproductive years, usually in their 30s, may have the condition as well [source: The Center for Reproduction & Women's Health Care].

Adenomyosis is not harmful, but when women in their childbearing years develop the condition it may affect their fertility. Recent research has found that women with adenomyosis have higher miscarriage rates than women without the condition, as much as double the risk of pregnancy loss, and they also appear to have an increased risk of premature labor and abruptio placentae (a condition when the placenta detaches from the uterine wall during pregnancy) [source: Martinez-Conejero, Levgur, Maheshwari]. While there seems to be a link between impaired fertility and adenomyosis, researchers have yet to put their finger on what about adenomyosis reduces the chances of conception and a good pregnancy outcome.

Alternative treatments often include non-steroidal anti-inflammatory drugs (NSAIDs), such as ibuprofen, to help lessen the pain and lighten monthly periods. Some women successfully ease their symptoms and can even shrink an enlarged uterus with hormones, including birth control pills, anti-estrogens and/or progesterone supplements. Women trying to get pregnant may find that gonadotropin releasing hormone agonists (GnRH-a), such as Lupron, or aromatase inhibitors help reduce symptoms, while preserving and perhaps improving fertility.

Women who want to get pregnant may also consider non-hysterectomy surgical options such as cytoreductive surgery, laparoscopic surgery, uterine artery embolization (which shrinks the damage by cutting off the blood flow to the affected area) and endometrial ablation (which reduces or removes the lining of the uterus). A relatively new non-invasive procedure called magnetic resonance-guided focused ultrasound (MRgFUS) -- in which a concentrated burst of ultrasound energy destroys damaged cells without harming surrounding tissue -- also shows promise as a fertility-restoring treatment for women with adenomyosis who want to become pregnant.

As many as 80 percent of women with adenomyosis also suffer from other uterine or gynecologic disorders, such as fibroids or endometriosis [source: The Center for Reproduction & Women's Health Care]. These co-conditions can make it difficult to determine whether or not fertility issues arise due to adenomyosis itself or as a symptom of another disease or condition.

Can acupuncture and hypnosis treat infertility?
Abnormal Menstrual Cycles and Fertility
How do fibroids affect fertility?