How do high FSH levels affect getting pregnant? 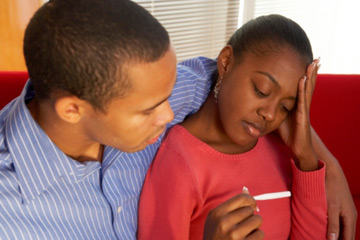 Your high FSH levels and negative pregancy tests may leave you feeling discouraged. But what do those FSH levels really mean?
Bananastock/Thinkstock

Our bodies' reproductive systems are complicated, controlled by an interconnected web of physiological processes. Here, we're going to look specifically at the follicle-stimulating hormone (FSH), what it does and how the amount your body produces can affect your fertility.

FSH is a hormone produced by the pituitary gland, a small, pea-sized organ that's part of the body's endocrine system. While it may be small, its job is anything but -- it's the gland that's in charge of the other glands in the endocrine system.

The pituitary gland is comprised of three lobes: anterior, intermediate and posterior. Each of these lobes is in charge of producing specific hormones. The posterior lobe, for instance, produces an antidiuretic hormone to help our kidneys absorb water. It also produces oxytocin, a powerful bonding hormone (sometimes called the love hormone) that's released during sexual arousal, childbirth and breast-feeding. The intermediate lobe produces a hormone that manages our skin's pigmentation.

In men, the body uses FSH to stimulate testicular growth and sperm maturation. In women, FSH stimulates the ovaries, encouraging them to develop follicles -- hence the name follicle-stimulating hormone. Stimulating an ovary's follicles basically means that, while a combination of hormones is at play throughout a woman's monthly cycle, it's FSH that fires up the development of a mature egg (or eggs) every cycle.

FSH levels fluctuate daily within a woman's cycle, as well as from cycle to cycle. Low levels of FSH indicate a woman's eggs are plentiful and of good quality, while high levels may indicate that the woman's fertility is impaired. This doesn't mean that she's unable to get pregnant and have a healthy pregnancy, but that getting pregnant and having a good pregnancy outcome may be more difficult than for a woman the same age with an average FSH level.

Next up, let's find out what normal FSH levels look like, what may cause those levels to rise, and how, if possible, to lower them.

There's a range of normal FSH levels depending on your age and whether you're male or female. Adult males usually have 1.5 to 12.4 milli-international units per milliliter (mIU/ml) circulating throughout their bodies. Adult females who are premenopausal have 4.7 to 21.5 mIU/ml depending on the person and where she may be in her monthly cycle [source: National Institutes of Health].

To find out how your levels measure up, there are both FDA-approved, at-home tests and laboratory tests that are performed in your doctor's office (at this time, however, at-home FSH testing isn't available for men). The at-home version is similar to an at-home pregnancy test -- on a certain day of her monthly cycle (FSH is typically tested on day 3), a woman urinates on a test stick. Laboratory testing is a simple blood test, also on day 3, and is often done in conjunction with testing the levels of other related hormones, specifically LH, to pinpoint if there's a problem with the amount of hormone the body is producing.

Abnormal levels of FSH, low or high, may be caused by autoimmune disorders, such as Graves' disease (an overactive thyroid), genetic conditions such as fragile X, or conditions affecting the endocrine system such as polycystic ovarian syndrome.

Elevated FSH levels are a good indication that a woman's egg supply is diminishing, or diminished. Age is the No. 1 indicator that a woman will have high FSH levels. Typically, FSH levels begin to rise naturally about 10 years before a woman enters menopause, and postmenopausal women may have levels of FSH that fall between 25.8 and 134.8 mIU/ml [source: National Institutes of Health].

What's happening here is that the body is always trying to stimulate eggs, long after a woman's egg supply is spent. High FSH is absolutely normal in postmenopausal women. High FSH in premenopausal women, however, may be caused by problems such as a pituitary gland disorder or chemotherapy and radiation treatment. Let's find out what, if anything, can be done to lower FSH levels when they've become too high.

The LH/FSH Ratio in PCOS

LH and FSH work hand-in-hand: LH drives ovulation, while FSH stimulates eggs for ovulation. A normal LH to FSH ratio is 1-to-1 in women who are premenopausal. But with a condition such as polycystic ovarian syndrome (PCOS), which affects an estimated 5 million American women, FSH levels may be low -- with a ratio of LH to FSH of 2-to-1 or 3-to-1 [source: The National Women's Health Information Center; American Association for Clinical Chemistry].

How to Lower FSH Levels

Women who are diagnosed with high FSH levels may find they're able to lower them with prescribed hormones. For premenopausal women who aren't trying to get pregnant, birth control pills are frequently used to balance hormones. For women who are trying to conceive, synthetic estrogen is a frequent solution, as well as drugs such as cimetidine, clomiphene, digitalis and levodopa -- prescription drugs often used to alter hormone levels during fertility treatments in an effort to conceive before donor eggs are recommended.

Alternatively or in addition to taking prescribed hormones, women with high levels of FSH may want to consider trying to lower their levels with lifestyle and diet changes. While it's unclear whether a woman's weight directly affects her FSH level, it is known that a woman's weight does influence the levels of hormones in her body and her overall fertility. Women who are overweight (a body mass index or BMI rating of 25 to 29.9) have a 26 percent lower chance of conceiving, and women who are obese (a BMI of 30 and greater) have a 43 percent lower chance when compared to women of normal weight (a BMI of 18.5 to 24.9) [sources: Boyles; Centers for Disease Control and Prevention].

Researchers continue to study the reasons why extra weight affects our fertility, and insulin appears to play a key role. When insulin levels rise in our bodies -- a common side effect of weight gain as well as a precursor to type 2 diabetes -- the body tries to regulate itself however it can, including changing the levels of hormones it produces. When the body overcompensates in this way, reproductive hormones may become unbalanced, and too much (or too little) can impact the body's ability to conceive.

Lowering FSH levels, however, doesn't guarantee a better or increased chance of conceiving, either naturally or with in vitro fertilization (IVF) treatments. FSH levels should be thought of as one way to understand a woman's ovarian reserve, her potential for conceiving with her own viable eggs, rather than a black-and-white answer to her overall fertility. Remember, FSH levels are just one part of the reproductive package.

For lots more information about FSH and fertility, head over to the next page.

Men who are overweight or obese may suffer from infertility. A study published in "Fertility and Sterility" found that men carrying excess weight had abnormal levels of testosterone and FSH, decreasing their chances of conception.