by Shanna Freeman
Prev NEXT
10 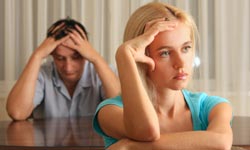 Before you get married, there are some pretty major issues that should be discussed. Hopefully they've come up over the course of your dating and engagement, and you've managed to come to some kind of understanding. But for whatever reason, sometimes these important issues don't get discussed until the wedding gets near. We're not talking about the little things, like whether the toilet paper should hang over or under the roll, or whether leaving just a tiny bit of juice in the bottom of the carton is an infuriating or innocuous habit. We're talking the major, life-changing issues. Disagreements about these are likely to cause problems in the marriage, and they're enough to give a man cold feet.

For example, suppose the man wants to have a houseful of children but the woman can't see herself having more than two. Or the disagreement includes religion, politics or where they're going to live as a couple. If neither person will budge on his or her stance now, you can't hope that they'll change after marriage. But if one or both people aren't honest with their feelings at the start, one of these major issues could end up being the reason for a canceled wedding.