Why should men maintain a moisturizing regimen? 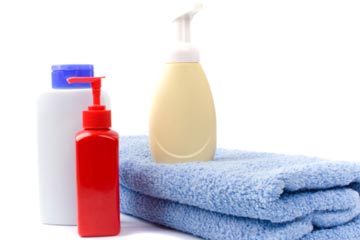 Dry, itchy skin: Nobody wants it. But will lathering up with moisturizer strike a blow to your masculinity? The very question seems a bit out of touch with the current reality. Men's care products have boomed in the past decade as they've become more culturally accepted (although during the recession, sales have tailed off a bit), proving that you don't have to sacrifice your manliness to protect your skin [source: Tschorn]. These days, while men are almost as committed to appearances as their female counterparts, most men still don't want to slather their skin with something that smells like roses.

What exactly is "moisturizer"? The name implies something that adds wetness to the skin, but the role of moisturizer is actually to retain moisture. That's why moisturizers contain humectants -- or substances that help to retain moisture -- and occlusives, which help to keep water from evaporating from the skin.

Men should maintain a moisturizing regimen for the same reasons that women do. Skin is the largest organ in the human body, and it's the first line of defense people have against disease and infection. Therefore, keeping your skin healthy is important not only to your personal comfort, but also to your health. Using skin moisturizer not only helps treat dry skin, but it can also offer protection if you have sensitive skin [source: Mayo Clinic].

Although everyone's skin is different, the daily routine of showering and scrubbing your body with soap can remove layers of dry, dead skin -- which is good -- but it can also strip your skin of protective oils [source: Ortiz]. In the winter, or in very arid climates, it can be even worse. To replenish these natural oils, and to protect your skin from potential damage and discomfort, most experts suggest using a combination of hand creams, balms and moisturizing sunscreens to preserve and protect your skin.

Benefits of Maintaining a Moisturizing Regimen

Take a scan through the long aisle of skin-care products in the grocery store, and you'll find various creams, lotions and potions that promise to make you look younger, healthier and wrinkle-free. Many of these claims are of course made by ad agencies, but it isn't all a gimmick. Moisturizers are proven to help treat dry, damaged skin and improve skin texture. Maintaining a good moisturizing regimen will make you more comfortable, and it will also make you look better because, let's face it, nobody looks their best with skin that is dry and flaky.

It's good to maintain a healthy skepticism of products that promise to transform your skin and your looks, though. The U.S. Food and Drug Administration (FDA) classifies moisturizer as a cosmetic, which gives manufacturers more leniency in hyping their products and ensuring that they actually live up to marketing claims [source: Mayo Clinic].

The top reason that people adopt a moisturizing regimen is to help restore moisture to dry skin. While some people naturally have dry skin, for most, it's brought on by showering too much, using the wrong type of soap, or from living in an especially dry climate. People with oily skin use moisturizer, too, although for different reasons. According to the Mayo Clinic, people with oily skin are more likely to suffer from acne, and as a result they often use soaps and other products that strip oils out of skin, leaving it very dry. Even people with normal skin can use moisturizer regularly to maintain balance in their skin [source: Mayo Clinic]. And if you have combination skin, you might have a dry, tight forehead for instance, even if your skin is overall normal or oily.

Another reason to use moisturizer is that it can be good for your health. The most serious skin-related health problem that people face today is skin cancer; although moisturizer won't prevent the disease, it can help treat sun damage. Also, there are several different types of moisturizers that contain sunscreen -- an easy way to kill two birds with one stone [source: Ortiz].

Should Men Use Different Moisturizer than Women?

Why should men purchase their own moisturizer when they can just swipe some from their wives or girlfriends? They shouldn't, necessarily. In many cases, men's and women's moisturizers are the same products, repackaged. But men's bodies -- including the skin -- are much different than women's, and a lotion that works for your wife or girlfriend might not be the best fit for you. Also, many women's lotions contain fragrances that smell, well, ladylike.

If someone says you have thick skin, they're probably referring to your ability to accept criticism and not take things too personally. But physiologically, men actually have thicker skin than women. In early 2011, Beverly Hills dermatologist Harold Lancer told the Washington Post, "Usually male skin has a thicker epidermis and a thicker dermis." (The epidermis is the outer layer and the dermis is the inner layer of the skin. [source: Tschorn].)

On average, men's skin is about 20 to 30 percent thicker than women's, but that isn't the only way that men's skin is different. It also contains more collagen and elastin, which gives the skin more elasticity and helps hold it tighter. In addition, hormones like testosterone affect the skin. Men are also much hairier than women (especially on their faces), and hair glands produce oil, which affects skin composition [source: WebMD].

Because men have thicker skin and bigger, oil-producing pores, their skin requires moisturizer that is formulated specifically for them. (And no, it isn't just the fragrance and the color of the bottle that is different.) In most cases, moisturizers for men have higher concentrations of active ingredients.

Education is another difference between men and women when it comes to skin care. Although it has become more accepted in recent years, many men are still less likely to devote much time or energy into skin care treatment.

Read on to learn about specific moisturizing regimens for men.

Are You Growing Scales?

No, not fish scales. "Scaling" refers to the peeling or flaking of outer skin layers, a result of very dry skin. Scaly skin is often hereditary, and it can be brought on by poor nutrition and certain medications [source: Skinsight].

If you want to keep your skin moist, you'll have to create a regimen and stick to it. And while some men might cringe at the sound of "moisturizing regimen," it's really not as bad as it sounds -- and it can be as easy or demanding as you choose. For a cheap, effective moisturizer, many men simply use petroleum jelly or Vaseline for Men Extra Strength Body & Face Lotion, which is a very effective way to keep your lips and body from getting too dry. That's not exactly a regimen, but it is a good starting point [source: Esquire].

Any good moisturizing regimen should begin in the shower. To keep your skin from drying out too much, experts recommend taking short, warm (not hot) showers. While you're in there, make sure to exfoliate the skin, which means sloughing off the outermost layer of dead skin cells and opening up the pores. Proper exfoliation can help revitalize your skin, and if you wash with soap without exfoliating, the soap won't be able to reach the dirt and oil clogging your pores.

Next, you'll want to wash with moisturizing soap. When drying off, it's better to air dry or pat yourself dry with a soft towel than to rub yourself dry. After washing, but before you're completely dry, you'll want to repair damaged skin, restore oils that were lost in the shower and preserve moisture in your skin. For that, you'll need to find the type of moisturizer or cream that's right for you -- applying lotions and heavier creams to trap the moisture in before it has a chance to escape [source: Ortiz].

There isn't one particular brand or type that is right for everyone. Read on to learn about specific products that you can use in your moisturizing routine.

What Moisturizers Are Best for Men?

What moisturizers you use will depend both on how devoted you are to keeping your skin moist and how much you want to spend. These days, there is a product for virtually everything you could dream of, and you can spend as much or as little money as you want on moisturizer.

If moisturizing is new territory for you, you'll want to experiment a bit in order to figure out what works best with your skin type. When purchasing a new product, be sure to check the ingredient list to make sure it doesn't have any chemicals you aren't comfortable putting on your skin. Also, look for moisturizers that are full of antioxidants and vitamin E, which will help restore skin and could help prevent serious illnesses, like skin cancer.

When it comes to exfoliation, there are both natural and chemical options. If you choose to go the natural route, oatmeal is one of the more popular options. Creating a homemade facemask from oatmeal is great for people with sensitive skin, but most importantly, it's cheap. Other natural exfoliants that you can use at home include lemon juice and sea salt. Chemical exfoliants contain either alpha hydroxy or beta hydroxy acids, and although they are effective, they can be harsh on the skin and even make it more sun-sensitive [source: Everyday Health].

For soap and body wash, most big-name brands in moisturizing body wash carry "for men" lines, as do traditionally male-oriented brands.

As with everything else, experimentation is key. For a lightweight moisturizer with a strong minty scent, try Nivea Men Energizing Hydro Gel, which typically costs $7 to $15. If you want to feel like a superstar, La Mer The Moisturizing Lotion ($165) is what the movie stars use. If you work as a farmhand, or if you just have very thick skin and a good budget, try Lancome Men Hydrix Moisturizing Balm [source: TODAY Show].

What's So Special about Vitamin E?

Many moisturizers contain vitamin E, but what exactly is it? Vitamin E is widely considered to be a powerful antioxidant, which means that it helps prevent cancer. Studies of mice have shown that application of vitamin E can help prevent skin cancer caused by UV radiation.

What are the best skin cleansers for men with oily skin?
Does shaving oil moisturize my skin?
How can I cleanse my skin without drying it out?