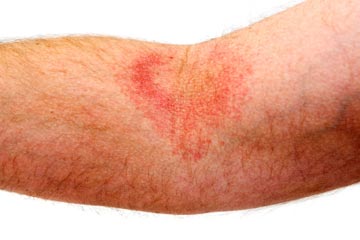 You haven't been near poison ivy in weeks, you aren't allergic to latex and you don't have allergies that give you hives -- at least, you don't think you do. So what's that red patch of itchy dry skin? It could be a type of eczema. An estimated 15 million Americans are affected by it [source: EczemaNet]. The name eczema is actually an all-encompassing title for a range of skin conditions that produce the same itching and redness, the most common of which is called atopic dermatitis (or atopic eczema).

Atopic dermatitis is the most common type of eczema found in infants and children under the age of two. In fact, about 10 to 20 percent of infants have eczema [source: UVA Health System]. The disease occurs less frequently in adults, but they can still be affected through periodical flare-ups that are triggered by different allergic reactions or reactions to skin irritants.

The symptoms of atopic dermatitis are overshadowed by one major characteristic -- itchiness. Atopic dermatitis is almost always itchy; it can be itchy even before a rash appears, and scratching can both cause and worsen the rash. In babies, eczema most often occurs on the face, arms, legs, scalp and neck. In children and adults, it usually shows up in the folds of elbows and knees. Skin affected by eczema can appear dry, thickened and scaly. Fair-skinned people who have the condition may have reddish patches of skin that turn brown, while dark-skinned people can experience changes in pigment that either darken or lighten the affected skin [source: WebMD].

Other diseases grouped under the label of eczema include:

Similar factors cause these types of eczema, and you treat most of them in similar ways. Read on to find out more about what can cause those itchy red patches.

As with many skin conditions, the exact causes of eczema are unknown, although experts believe that it may be caused by the immune system's overactive response to certain triggers [source: WebMD]. Asthma and hay fever are other atopic diseases, so people with a family history of these conditions are likely to be affected by atopic dermatitis.

Though the scientific cause of eczema is unknown, it's fairly easy to identify some of the more common causes of eczema flare-ups in adults. Substances that cause burning, itching or redness are often sources of flare-ups. Common irritants include rough materials such as wool, household products such as soap or detergent, or fumes from paint or cigarettes. It really depends on what your immune system responds to.

Allergens like animal dander and dust mites can also spark a flare-up. If you're allergic to certain types of food, you may have a short bout of eczema. However, it can be difficult to pinpoint exactly which food it is that's causing the outbreaks. To find out what might trigger your eczema, see your doctor. A doctor can do a skin test, where he or she touches the skin with the possible allergens and observes the reaction, or conduct blood work to find what you're allergic to, if anything. Both of these tests may have false positive reactions, so they are not always reliable [source: National Eczema Association].

Exposing your skin to certain environmental conditions may also result in flare-ups. Sudden changes in temperature or humidity, sweating, upper respiratory infections and colds commonly trigger eczema. And though stress and emotional disorders don't cause eczema, they can worsen its effects. Although there is no cure for eczema, it is not contagious, so don't worry about contracting it from or giving it to others [source: National Eczema Association].

To find out how to treat eczema symptoms and what to do if your skin becomes infected, keep reading.

Weeping eczema refers to eczema that has worsened and resulted in an infection, which consists of pus-filled blisters that are wet and oozing -- basically, they "weep" [source: National Institutes of Health]. Infections like this happen most often when you continually scratch the itchy areas of your skin. For this reason, weeping eczema is more common in children, because it can be more difficult to prevent them from scratching. If your child has eczema, watch him carefully to make sure that he is not scratching the areas of his skin that have eczema.

The blister-produced ooze that gives weeping eczema its name is usually golden in color and dries to become a crusty layer on the skin's surface [source: AAFA]. Cold compresses and wet cloths may help soothe the itching and pain, but don't rub the affected skin with them, because scratching will only worsen the infection. Other signs of infection include extreme redness, cold sores and fever blisters.

Eczema, if scratched enough, can become infected with bacteria (most commonly a staphylococcus or "staph" infection) that live happily and harmlessly on the surface of your skin. Once staph gets through the barrier of your dermis, then it can cause problems. At the sign of infection, consult your doctor, and he or she can prescribe either topical or oral antibiotics that will heal the infected areas.

Fortunately, not all eczema becomes infected. To find out how to treat eczema that hasn't been infected, read on.

A skin condition that is commonly confused with eczema, impetigo is most prevalent in children but it can also occur in adults in conjunction with eczema [source: InteliHealth]. The red bumps or blisters that signify impetigo most often appear on the face, near the nose or mouth. Impetigo can be cured with antibiotics that your doctor prescribes. Unlike eczema, it is contagious, so be sure to wash infected areas carefully and frequently to prevent spreading.

Since scratching the affected areas can lead to infection, the goal in treating atopic dermatitis is to stop the itch and prevent future outbreaks [source: National Eczema Association].

At home, try applying lotions and creams to your skin while it is damp (after taking a shower or bath). Your skin will retain moisture, which helps soothe itching, as does a cold compress. You can also use an over-the-counter hydrocortisone cream to tone down the itch. If you visit your doctor, he or she can prescribe medications with topical corticosteriods that will help to reduce inflammation. In severe cases, doctors may prescribe corticosteroids in pill form instead of topical creams. You can also take antihistamines to reduce itching or talk to your doctor about chemical treatments that use tar to stop itching and irritation. In addition, some eczema patients use phototherapy treatments, which consist of ultraviolet (UV) light that targets areas affected by atopic dermatitis [source: EczemaNet]. Your treatment will typically depend on comfort, cost and convenience.

The second task is prevention. If you know that you are prone to flare-ups, take steps to prevent them. Moisturize your skin regularly, avoid sudden changes in temperature or humidity, and try to stay dry and cool. Stay away from scratchy materials, harsh soaps and detergents, and solvents. Find ways to reduce stress, and know that exposure to environmental factors such as pollen, mold, dust mites, animal saliva and pet dander can cause flare-ups [source: MedlinePlus].

And most importantly -- even though we've said it a few times already, it bears repeating -- don't scratch! Eczema is a fairly treatable condition but it can only get worse if you scratch it. So, after you've applied moisturizer, break out the potholders or mittens and keep your mitts off the itchy bits.

For more information about eczema, look over the Web sites listed on the next page.

The Food and Drug Administration (FDA) approved two topical drugs that affect the immune system and treat eczema. They are called topical immunomodulators, or TIMs. The first is pimecrolimus (formerly known as Elidel) and the second is tacrolimus (also known as Protopic and Prograf); both drugs have been labeled with the "black box warning" of the FDA because they have risks related to cancer. Using these drugs is only recommended for moderate to severe cases of eczema, and only for short-term use after other treatments have failed. These prescriptions should not be given to anyone under two years of age [source: WebMD].