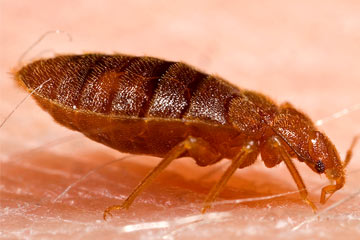 There are lots of different types of bedbug, another small, flat oval insect that feeds on mammal blood. Adult bedbugs are about the size of an apple seed, less than a quarter of an inch (6.35 millimeters) long [source: Pollack]. They're drawn to body heat and carbon dioxide and usually crawl to or drop down on their victims. To feed, they pierce the skin with two tubes -- one injects saliva (which contains both an anticoagulant and a numbing agent), while the other is for feeding. A bedbug bite doesn't hurt right away, and the bedbug quickly retreats when it's done. Once again, it's the saliva that causes an itchy allergic reaction and leaves you with raised welts that are often in a cluster or row on the skin.

True to their name, bedbugs prefer to hide in mattresses and other types of furniture. They are so flat that they can squeeze into very tiny openings, making them difficult to spot. They're also mostly nocturnal, which is why you're at risk for being bitten when you're in bed. Extreme scratching of the bites, as with other skin parasite bites, can lead to infection. Bedbugs can also carry diseases, but research shows that it's unlikely that they can spread them to their hosts. Instead, infestations typically just result in itching, discomfort and sleeplessness.

Due to increased travel and restricted pesticide usage, bedbug infestations are on the rise in industrialized countries where they had previously disappeared [source: Stoppler]. People often bring them to hotels in their suitcases or take them home the same way. In addition to seeing a bedbug or noticing the bites, you might spot an infestation by the droppings, which are tiny, black spots on a mattress or other bedding. You can treat the itching with over-the-counter anti-itch creams like hydrocortisone, but the only way to get rid of bed bugs is to use insecticides and steam-clean with temperatures reaching at least 120 degrees Fahrenheit (49 degrees Celsius).

If these external skin parasites weren't gross enough, next we'll look at internal, or burrowing, parasites. Meet the scabies mite.