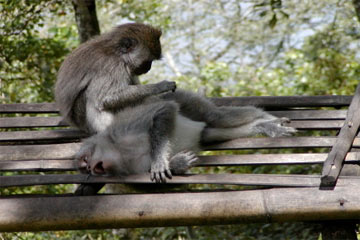 A Balinese long-tailed monkey picks fleas off another. Humans used to do this as a social activity too.
©iStockphoto.com/mmozzies

If reading about skin parasites hasn't left you feeling a little itchy, you're probably in the minority. It may surprise you, however, to know that our thoughts about parasites have changed over the centuries. Many of us also have some serious misconceptions about how people become infested with parasites and what it says about them.

Skin parasites have been around for thousands of years. Lice have been dated to more than five million years ago, as scientists discovered that the lineage of human head lice separated from chimpanzee head lice around the same time that their hosts diverged. Scabies mites date back to at least 2,500 years ago. Scholars believe there are references to scabies and other parasites in the Bible, and the Greek naturalist Pliny gave recommendations for getting rid of lice in his writings around 40 C.E. [source: Roncalli].

Humans have always strived to rid themselves of parasites as part of what some researchers point to as a relic of our animal grooming past. Yet it has not always been considered such a shameful, private affliction. In the past, ridding ourselves of fleas and lice was often a group bonding activity (similar to primates that groom each other), and it still is in some areas of the world. Parasitic infestations did not differ by socioeconomic class -- the difference was that the wealthier you were, the easier it was for you to privately get rid of your parasites. Wealthy people had servants to assist them as well as access to the latest home remedies and hygienic products. It's also important to keep in mind that it took until the 20th century to fully make a connection between cleanliness and health.

Today, getting skin parasites is often associated with being dirty. However, many infestations are simply a case of being in the wrong place at the wrong time. Having head lice, for example, doesn't mean that you don't bathe properly or keep a clean house. You were simply unfortunate enough to come in contact with an infected person or animal. While many parasites are prevalent in less developed countries, providing access to basic treatments, as well as education on preventive measures and hygienic practices, can reduce infestations. Skin parasites can attack anybody; you just have to take steps to ensure that you aren't likely to be on the menu.

For lots more information on skin parasites and related topics, check out the links below.