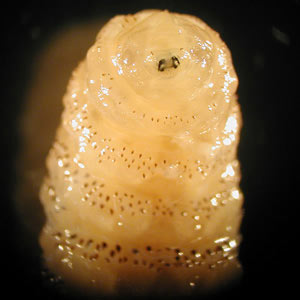 The human botfly is a small, hairy fly found in Central and South America. Unique among skin parasites, the botfly itself doesn't actually burrow under the skin. Instead, it lays its eggs on mosquitoes, ticks or other flies. When a person is bitten by one of these insects, the eggs are triggered to hatch into maggots by a human's body heat [source: U.S. Army Center for Health Promotion and Preventative Medicine].

Because the maggots hook into the skin inside their burrow, they are difficult to remove. One method involves placing raw meat over the hole. When the maggot is unable to breathe, it burrows out into the meat. Other suggestions include covering the hole with glue, tape or petroleum jelly to suffocate the maggot. Trying to simply pull it out is usually unsuccessful because it may burst. Pieces can be left behind in the hole and cause an infection. Because of this, botfly maggots are best removed via surgery by a doctor. In the past, physicians have removed them from people's genitalia, arms, legs, chests, eyes and scalps.

Botflies can cause an infection or tissue damage depending on where the maggot burrows, but typically only a scar is left behind after the maggot's removal. The best way to prevent a botfly maggot infestation is to avoid being bitten by one of the adult fly's hosts. You should wear protective clothing and repellant when outdoors in areas where you're likely to get bitten.

We've looked at all manner of insects, from flea to flies, in the realm of skin parasites. Now, for something completely different: worms.