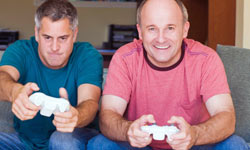 The average age of a video game purchaser is 41, and 39 percent of all gamers are over the age of 50.
Photodisc/Thinkstock

Quick -- you'll get three free lives and a bonus power-up if you can describe today's typical video gamer. What's that you say? Sallow-skinned teenager basking in the glow of a computer screen in a basement bedroom at his parents' house? Buzz. The aliens won, the Earth is lost. Game over.

Actually, the profile of the average gamer is as surprising as finding a video game machine that still operates with only a quarter: It's a 37-year-old man, according the most recent survey conducted by the Entertainment Software Association (ESA). Perhaps even more surprising is the fact that the average age of a video game purchaser is 41, or that a full 39 percent of all gamers are above the age of 50.

That makes nearly half of all gamers baby boomers -- the portion of society that was born between 1946 and 1964.

Sure, some of them are playing video games with their kids and grandkids (ESA says 45 percent of parents do exactly that), but many more are tapping keys, wielding controllers and dragging their fingers across touch screens for their own enjoyment.

To help with the fun, here we present 10 games boomers are sure to love (and a few that might actually help keep them fit, too).