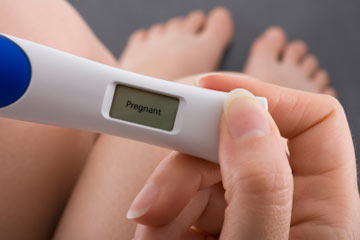 I detect some hCG.
©iStockphoto.com/BrianAJackson

In 1927, researchers discovered that pregnant women's urine contained a substance not normally present outside of pregnancy: human chorionic gonadotropin, or hCG. This represented the first modern pregnancy test, and to this day, we still check urine for signs of hCG to determine pregnancy. Doctors also look at hCG levels (among other factors) in pregnant women to assess risk of birth defect.

HCG may play many roles, but one function it performs is guaranteeing that a developing fetus receives the calories and nutrients it needs to grow, nearly independent of the daily caloric intake of the pregnant woman in those early developmental months. How does it do this?

We aren't ravenous for fatty foods for no reason. Our bodies like to maximize caloric intake in case lean times are ahead. In the case of women, excess calories tend to wind up in "problem" areas such as the hips, buttocks, abdomen and thighs. However, once pregnant, fat from these areas is released in the presence of hCG, and this fat then makes its way to the fetus. This way, if a woman doesn't consume the nutrients needed for fetal growth, her fat reserves will suffice. (Structural fat, such as that found in the face or layered beneath the entire skin, isn't affected.)

HCG is produced by a woman early in her pregnancy, and levels of hCG in the bloodstream peak at around 14 weeks. After that, levels gradually decrease. HCG's presence in a pregnant woman seems to occur in the timeframe when a woman would be least likely to know she is pregnant, and therefore least likely (especially in ancient -- and leaner -- times in human history) to be consciously trying to secure nutrients to sustain a pregnancy.

It was during research in the 1930s when one doctor, A.T.W. Simeons, noticed that boys being treated with hCG for underdeveloped gonads were also able to lose excess weight by eating much less without any accompanying hunger pangs. Simeons' interest in hCG soon shifted to its potential as a diet aid, and after two decades of research, he published a paper touting its effects, and developed a dietary regimen for using the drug as a weight-loss tool.

So, how few calories is one instructed to consume on the hCG diet? You'll find out in the next section, and you may be shocked.

How to Succeed at Intermittent Fasting