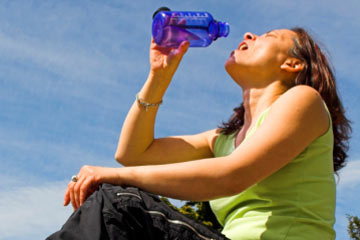 Hyponatremia's milder symptoms include nausea, vomiting, and muscle cramps and spasms. The danger is that these are similar to the symptoms of dehydration, and if you misdiagnose yourself and start drinking more fluids, you'll make the problem more serious.
Hemera/Thinkstock

Water is the world's most abundant substance, covering nearly three-quarters of the globe [source: Gleick] and comprising 60 percent of the human body [source: Schirber]. It's vital to virtually every human biological process and may be the single healthiest substance on Earth. But, as if to prove the point that you can have too much of a good thing, it turns out it's possible to overdo H20.

And if you think too much water doesn't sound too bad, be warned -- it can be fatal.

Hyponatremia occurs when excessive fluid consumption dilutes salt levels and creates a sodium imbalance in the body. In an effort to reverse this imbalance, cells allow water to seep in, causing them to swell. Most cells can manage, but because the brain has little room in the skull, even slight swelling can result in big problems, including disorientation, loss of consciousness, seizure and death.

Cases of hyponatremia are rare and started occurring with some frequency in the 1980s as the popularity of running exploded [source: Engler]. Dr. Tim Noakes, a sports-medicine physician and author of the popular book, "The Lore of Running," began hearing about athletes experiencing overhydration during events. This was unheard of in fitness circles, where the rule of thumb had been to stay hydrated by drinking loads of fluids before, during and after a race. But as incidents increased, Noakes dived into the data and published the first paper on the subject, "Water Intoxication: A Possible Complication During Endurance Exercise." Since then hyponatremia has become a primary concern for athletes and sports physicians.

Shockingly, in the history of running, not a single death has been attributed to dehydration [source: Kolata]. Hyponatremia, on the other hand, has been blamed for more than a dozen deaths in recent years [source: Kolata]. According to a study in The New England Journal of Medicine, 13 percent of nearly 500 runners studied at the Boston Marathon finished the race in a state of hyponatremia. These runners were predominantly less experienced athletes who took longer to complete the race.

And while it's important to stay hydrated as a way to replenish fluids lost to perspiration, sweat is a combination water and salt, and water or sports drinks alone can't compensate for the sodium depletion that occurs during an event. Endurance events in particular may last several hours, which means more time on the course to take in fluids [source: Wadyka]. The result is a fluid saturation that has become an even bigger health threat than dehydration.

In this article, we'll take a close look at hyponatremia, its symptoms and how it can be treated.

Athletes aren't the only people susceptible to this condition. The elderly can also be affected because of the physiological changes that come with aging. Renal function, for example, can dramatically change the metabolization of water in the body and upset the sodium balance [Source: Merck]. According to the American Academy of Family Physicians, as many as 18 percent of elderly people living in long-term care facilities are hyponatremic [source: Kugler]. Women entering menopause are also at risk of hyponatremia because of hormone fluctuation and its effect on the body's ability to regulate sodium levels.

But for the purposes of this article, we're going to concentrate on how hyponatremia occurs in otherwise healthy adults.

The milder symptoms include nausea, vomiting, and muscle cramps and spasms. The danger is that these are similar to the symptoms of dehydration, and if you misdiagnose yourself and start drinking more fluids, you'll make the problem more serious. It's very common during races for medical personnel to mistake hyponatremia for dehydration and prescribe intravenous fluids to introduce fluids into the body very quickly.

Athletes participating in high-intensity or endurance events are vulnerable to the confusion because dehydration is usually a top concern for participants. Athletes are trained to know how dehydration can not only be dangerous, but also negatively impact their performance. They're quick to pound some water or a sports drink even though they may not feel thirsty.

The symptoms can also be accompanied by headaches, lethargy and fatigue as the body fights to correct the sodium imbalance. In more serious instances, the brain swells, and confusion and dementia can set it as it presses against the skull. Brain swelling is the dangerous risk factor associated with hyponatremia because it can happen so quickly -- and escalates just as rapidly. Symptoms such as irritability and radical personality changes set in, and immediate attention is required to arrest or reverse potential brain damage. Finally, in the gravest cases of hyponatremia, the person can slip into a coma and even die as a result of pressure on the brain.

In the next section, we'll discuss exactly how hyponatremia occurs, who is at risk and how it can be identified. 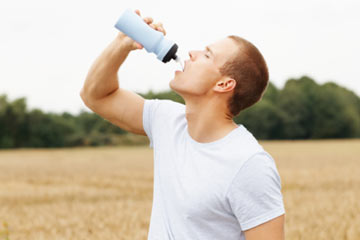 While it is important to stay hydrated as a way to replenish fluids lost to perspiration, sweat is a combination water and salt, and water or sports drinks alone cannot compensate for the sodium depletion that occurs during an event.
Hemera/Thinkstock

Hyponatremia happens when sodium levels in the blood dip below a certain level, often triggered by overhydrating. Normal plasma contains between 136 and 145 milliequivalents per liter (mEq/L) of sodium; hyponatremia can set in when that level dips below 135 mEq/L. Notice how fine the line is between balance and distress.

There are three ways sodium fluctuations can happen in the body:

The importance of sodium in the human body is critical. Sodium is how we maintain blood pressure and regulate our fluids. It also provides support for muscle tissue. Maintaining a proper balance is critical to a host of bodily operations, including renal and brain function [source: Schirber].

Other factors can also cause the onset of hyponatremia, including recreational drug use or heavy drinking, low-sodium and water-intensive diets, and conditions such as primary polydipsia, which interferes with your ability to regulate thirst and, as a result, makes you drink too much water [source: Mayo Clinic].

Like most conditions, the easiest way to treat hyponatremia is to avoid it, if possible. This means having a general understanding of your own personal hydration needs. The traditional recommendation of having eight 8-oz. glasses of water each day is not only hopelessly overused, it's also absent of a single piece of research to back it up [source: Burfoot].

Controlling sodium intake is another important preventive measure. Since hyponatremia is essentially a reduction in sodium levels, you may choose to increase your intake by supplementing the sodium you get from food. The average American consumes too much sodium as it is, so consult a physician before you begin adding it to your diet [source: Shore News]. Experts recommend daily consumption of around 2,400 milligrams (about half a teaspoon) of sodium, but if your fluid balance is off kilter, more may be needed.

If you know you're prone to hyponatremia, cutting back on fluids is the most direct way to correct the imbalance.

For severe cases, more direct and aggressive therapy is required. And because the only symptoms are sometimes neurological, time is of the essence. Administering sodium intravenously can work quickly to raise levels and reverse the swelling.

There are also certain medications that can be used to address the underlying cause. A doctor will make the decision to administer drugs based on certain factors, including the severity of hyponatremia and what treatment will be the most direct course of action. Drug therapy is usually reserved for chronic cases that don't require immediate correction.

Finally, hyponatremia can be caused by certain hormone imbalances, and in these cases, supplements may be taken to replace any deficiencies that may be occurring. Again, this treatment is typically for people with chronic hyponatremia and not those in immediate danger.

The most important thing to remember when addressing hyponatremia is that treating the underlying cause -- sodium deficiency -- is usually the preferred method. Sodium imbalances can be managed through diet and may be effective in preventing the triggering imbalances.