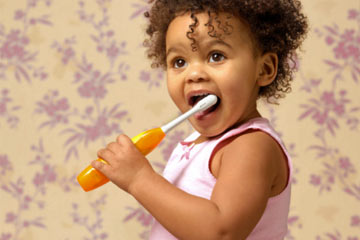 You might think that brushing baby teeth isn't even really necessary since they fall out anyway. Not true. Brushing teeth is critical for kids of all ages.
Peter Dazeley/Getty Images

"Brush thoroughly after meals or at least twice a day." Those simple instructions are familiar to anyone who has ever read the side of a tube of toothpaste, and most of us learned long ago that fluoride plays an essential role in building and keeping a set of strong, healthy teeth. But the same toothpaste label also tells us that children under 2 years of age should use fluoride toothpaste only under the advice of a dentist or physician, and children under 6 should be supervised closely when they brush. So what exactly is fluoride, and why the warnings about using it for young children?

Fluoride is a natural mineral found abundantly in water, soil and rocks throughout the Earth's crust. Fluoride is a chemical ion of the element fluorine, meaning simply that it has one extra electron that gives it a negative charge [sources: Colgate; Crosta]. If you check the toothpaste label one more time, you'll see that fluoride appears not on its own, but in one of the three compounds approved by the U.S. Food and Drug Administration for use in toothpaste: stannous fluoride (a compound containing fluoride and the element tin), sodium fluoride (a compound containing fluoride and sodium) and sodium monofluorophosphate, which is derived from sodium fluoride [sources: McCoy; Tom's of Maine].

The fluoride in toothpaste helps to prevent tooth decay and cavities in two ways: First, it prevents the bacteria in plaque from forming acids that erode the tooth enamel and cause decay. Second, in areas of the teeth that have already been damaged by acids, fluoride builds up in the weakened areas and begins to strengthen, or remineralize, the teeth [sources: Crosta; McCoy].

The Facts About Fluoride 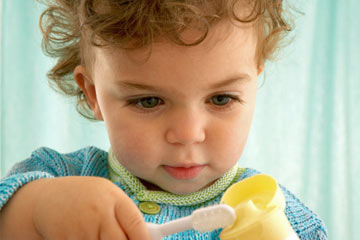 Don't let your toddler brush her teeth unsupervised -- even if you're using fluoride-free paste. It's important you coach her to spit out the toothpaste, not swallow it, at an early age.
Marcy Maloy/Getty Images

Although your child shouldn't use fluoride toothpaste before the age of 2, chances are he or she is ingesting fluoride from other sources long before that. Fluoride is found in many foods, juices, and soft drinks and exists naturally to some extent in almost every water supply. In areas where the natural fluoride levels in the water supply are below the .7 parts per million (ppm) recommended by the ADA, municipalities often add fluoride to bring the water up to the desired level [source: American Dental Association].

Since a small amount of systemic fluoride (i.e., fluoride that is consumed or ingested rather than applied to the teeth) has been shown to be effective in reducing tooth decay, dentists and pediatricians will often recommend fluoride supplements for children over 6 months old whose water contains lower levels of fluoride [source: American Dental Association].

The toothpaste aisle of your drugstore or supermarket probably offers plenty of options for fluoride-free toddler toothpastes, but while these sweet-tasting cleaners (many of which feature popular cartoon characters on their packaging) might entice your child to brush, the CDC recommends simply using plain water and a small, soft-bristled toothbrush for children younger than 2 [source: Centers for Disease Control].

As your child approaches his or her second birthday, continue to reinforce safe brushing habits by reminding them to spit when they brush -- even if they're brushing only with water or fluoride-free "training toothpaste." At your child's two-year checkup, talk with the pediatrician about introducing fluoride toothpaste, then supervise brushing closely until you're confident that your child is reliably spitting -- not swallowing -- the toothpaste.

You'll need to call upon your best parenting patience here: According to the CDC, children have weak control over their swallowing reflex until age 6, so you'll most likely need to help for at least a few more years [source: Centers for Disease Control]. It's also important they use only the recommended amount of toothpaste -- that's a small, pea-sized amount, not a big stripe down the entire surface of the brush -- since despite all your best efforts, young children are still likely to swallow at least as much of the toothpaste as they spit out.