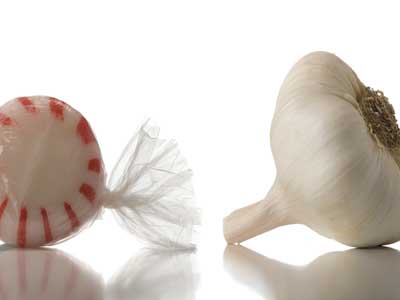 That peppermint won't have a long-lasting effect on the strong scent of garlic on the breath. See more personal hygiene pictures.
Mike Kemp/Getty Images

What's more uncomfortable than having a conversation with a close talker? Having a conversation with a close talker who's sorely in need of a breath mint. Granted, bad breath happens to good people. You go out for pasta primavera and inadvertently eat the equivalent of an entire clove of garlic. Or perhaps you decide to satisfy a hankering for a cheese steak sandwich with onions. Even if you immediately brush your teeth and gargle with mouthwash, the offending odors from your meal can linger on the breath like an annoying song stuck in your head. No matter what methods you try, sometimes you can't shake that stink.

When we think of bad breath, we often relate it to garlic and onions. These prime culinary culprits can certainly produce transient, or temporary, bad breath once they get inside our bodies because of their chemical make-up. Garlic, for instance, contains the sulfuric compound allicin that gives the plant its pungent punch [source: Herbert]. That, in turn, can translate to wince-inducing breath.

Chronic cases of beastly breath, called halitosis, are harder to tackle than simply choosing less flavorful menu items. Halitosis affects an estimated one in four adults, not to mention the scores of us with healthy mouths who go the extra mile to ensure that our exhales don't offend [source: Haraszthy et al]. Then there are those who experience the fear of bad breath -- halitophobia -- so intensely that their dentists may refer them to psychologists.

As a result, the oral hygiene industry is booming. Grocery store and pharmacy shelves are packed with a vast array of products to slay those oral odors, including gums, sprays, toothpastes and more. Analysts estimate that by 2010, related sales in the United States will hit nearly $5 billion [source: Alexander]. And Americans aren't the only ones fretting over noxious breath. Other cultures have their own ways of freshening up, such as chewing on cloves in Iraq, cinnamon in Brazil and guava peels in Singapore [source: Fisher].

But what's going on inside of our mouths that triggers halitosis? Open up, say "ahhh" and let's sniff out the source of those smells.

Bacteria in the Mouth: How Halitosis Happens 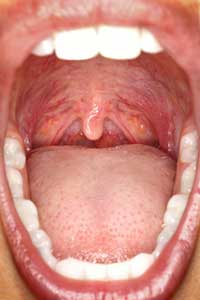 Halitosis is usually caused by bacteria produced inside our mouths.
Christoph Wilhelm/Getty Images

Like the reason behind a pesky cough or case of the sniffles, chronic oral halitosis, or bad breath coming from the mouth, is caused by bacteria. The average person has around 800 types of bacteria hanging out in his or her mouth [source: Haraszthy et al]. If you magnified a single cell from the surface of your tongue, you might see as many as 100 types of bacteria clinging to it [source: Yaegaki and Coil].

The mouth is like a bacteria factory, prepped with the ideal conditions for organisms to live and breed. You can compare the environment inside of your mouth to a sauna. In the same way those hot, humid rooms stimulate our bodies to pour out buckets of sweat, our clammy oral cavities encourage bacteria production. But it isn't the bacteria alone that turn our breath sour; rather, it's the interaction between the food we eat and that oral bacteria that sets off the chain reaction that ends with you frantically popping a peppermint.

Certain bacteria promote bad breath by first breaking down leftover proteins from food particles, dead cells and mucous into amino acids. In order to extract energy from those amino acids, the bacteria further dissect those molecules, causing them to release volatile sulfuric gases. Sulfuric gases give off that distinct rotten egg stench often added to natural gas lines to allow us to sniff out leaks. These bacteria thrive most abundantly in tucked-away areas of our mouths, including crevices between teeth and the back of our tongues.

Dry mouth also promotes halitosis. Our saliva actually serves as a natural mouthwash to get rid of those excess food particles and rinse away bacteria. When we sleep, our body slows saliva production, which explains the why we wake up with the oral stink bomb of morning breath -- and people with chronic dry mouth, or xerostomia, have even more pungent morning breath than most of us. Your medication could be prompting halitosis as well. Antidepressants, painkillers and antihistamines often include dry mouth as a side effect [source: Haraszthy et al].

Although oral bacteria initiate 85 percent of halitosis cases, foul breath may be a sign of problems elsewhere in the body [source: Merck]. When you get a sinus infection or a severe cold, your breath takes a turn for the worse as mucous production spikes and it leaks down the back of your throat onto your tongue. Gastrointestinal malfunctions, kidney problems and lung infection are also known to taint the breath. Lack of food can also have a malodorous effect: When your body runs out of sugar to burn for energy, it starts metabolizing fat, a process called ketoacidosis. And when the body burns the ketones in fat, it gives you fruity-scented breath [source: Mayo Clinic].

Now that we know what's behind halitosis, how might you nip it in the bud?

How to Cure Halitosis

Most breath mints are fleeting saviors, like miniscule snacks for a famished stomach. Their initial rush of cool mint flavor envelops our mouths, immediately masking whatever undesirable taste preceded it. But soon after, minty breath is a mere memory. The freshness gradually fades, giving way to the odious odor that vexed us only minutes before.

To effectively battle bad breath, your first -- and cheapest -- line of defense is to quit feeding the bacteria. Remember that the primary building blocks of the nasty oral gases we call bad breath are leftover food particles. That's why it's important to thoroughly brush your teeth and floss regularly. When cleaning your mouth, pay special attention to the back of your tongue. Brush or use a tongue scraper as far back as you can in order to strike at the mission control center of odor-causing bacteria in the mouth. Not doing so can lead to periodontal disease and gingivitis, which, in turn, encourage foul breath. Open spaces that form between unhealthy gums and your teeth make prime bacteria-breeding spots.

One of the most common products people purchase to combat halitosis is mouthwash. The British Medical Journal recommends using solutions with chlorohexidrine gluconate, which is proven to kill pesky bacteria [source: Scully et al]. Rinsing with it at night preps you for a fresher-smelling morning since dry mouth that occurs when you sleep fosters bacteria production [source: Fisher].

Not surprisingly, what you put into your mouth during the day can also influence the olfactory impact of your breath. Drinking water throughout the day is not only good for your body, but also good for your breath. It washes away bacteria and particles that prompt halitosis. Certain foods including parsley, fennel seeds and carrots can freshen your yapper as well.

When improved oral hygiene doesn't alleviate halitosis and you suspect you have a chronic problem, it may be time to make an appointment with your dentist. A dentist can then help you take more forceful action to quell halitosis. As mentioned on the previous page, bad breath could be coming from problem areas in your body aside from the mouth. In that case, a doctor might be able to pinpoint the source.

­If you're simply insecure about how your breath smells, you aren't alone. Around a quarter of people who consult halitosis specialists don't have chronic halitosis [source: Fisher]. That's because many people misjudge their breath as smelling worse than it does in reality. Garlic and onion-laden dishes will certainly crank up the stink factor, but proper oral care should keep your mouth and breath fresh and clean.

How Oil Pulling Works
Why can’t you smell your own bad breath?
Dental Problems and Bad Breath

What is a dental scaler?
Can fluoride make your teeth yellow?
In what order do babies' teeth fall out?