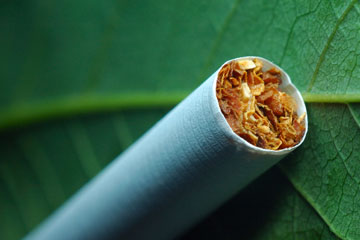 Before the invention of the cigarette, someone had to make the discovery that a tobacco plant could be smoked for pleasure. See more drug pictures.
iStockphoto/Thinkstock

Thanks to science of plant genetics, it is possible to answer this question.

Researchers who study the changes in plants that occur as a result of cultivation have assigned a range of dates for the beginning of tobacco between 3,000 and 5,000 B.C. Tobacco was first grown in the Andes [source: Gately].

Chances are, though, that people were smoking it before they took the trouble to specifically grow and cultivate it. Historian Iain Gately theorizes that the discovery of the magic smoke of tobacco fell along the same lines as other discoveries by early man: It was an accident.

It's sort of like lye soap: You get a hot pot, some ashes and a heavy downpour, and you'll return to your campsite to find a big bloom of foaming soap. Gately reports that anthropologists credit the discovery of smoking to a tired or injured man resting next to a burning bush of tobacco. And that bush spoke to him. Somehow, breathing in its fumes made him feel better.

Another likely explanation lies with the practices of herbalists within South American tribes. These people knew their plants. They had to; otherwise, the mushrooms or unidentified berries would have killed them off long ago. The healers and shamans entrusted with curing people often went through rigorous training. They learned not only what their predecessors knew, but also how to identify relationships among plants and how to test new plants. Their knowledge of vegetation covered not only identification and common uses, but also how to dry, steep, grind and mix those plants to form healing substances. Chances are, the first healers who ground up tobacco and sniffed it realized just how good it would be if they set fire to it, as well [source: Wilbert].

For more information on smoking, check out the links on the next page.