How do boogers form in your nose? 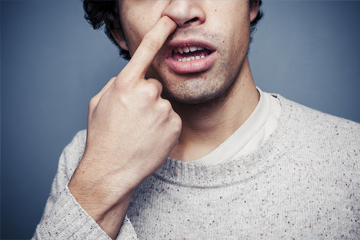 When mucus has trouble exiting the nostrils, it dries out and clumps together. That's when you get nose goblins.
lofilolo/ThinkStock

You've probably caught someone in the act of picking their nose and inspecting the contents more than once. Disgusting, right? But you do it, too. Except maybe you opt to remove your boogers using a tissue in the privacy of your own home. Or car. Or that empty elevator you're riding to the 10th floor. Whatever. We won't judge.

Whether you know them as a "bat in the cave," or a "nose goblin," there's a good reason for boogers — even when they sticks around in gelatinous little lumps. The lining of the nose and sinuses — also known as the epithelium — produce at least 1 quart (1 liter) of mucus each day. That's a lot of snot [source: Kids Health].

The mucus in your sinuses keeps the nasal linings moist and helps with your sense of smell. Most importantly, it traps dust, bacteria, pollen and other contaminates. Mucus essentially acts as a sticky fly strip, grabbing pollutants and keeping them from getting into your respiratory system. Without mucus, most of these particles would end up in the lungs [source: Health Hype].

The trapped mucus clings to miniature hairs called cilia. The cilia move the mucus toward the nearest exit, either toward the front of the nose or the back of the throat (where it is swallowed in small amounts). Sometimes the mucus has trouble fully exiting the nostrils. It begins to dry out, and may become clumped together. Additional dust and other debris join forces with the drying mucus and — voila — a booger is formed [source: Kids Health].

Boogers form more frequently when you have the common cold or a bout with allergies. Dry, dusty and/or air-conditioned air can cause an increase in booger formation, too. Even with all this arid influence, a booger may remain soft and ripe with airborne particles. Sometimes, however, a booger can become extremely hard and have rough edges that pierce the nasal lining and cause it to bleed [source: Health Hype].

Now, for a rather indelicate matter: The next time you see a child or (help us all) an adult inspect the contents of his or her nasal cavities, see if there's a surreptitious nibble. Turns out, the people eating their boogers may be taking a step on the evolutionary ladder. A biochemist at the University of Saskatchewan theorized that eating boogers is actually a way of introducing germs into — and strengthening — an immune system. This "hygiene hypothesis" asserts that dining on bits of mucus may actually build a super-powered immune response that could give booger-eaters an edge over the rest of us. Bon appétit [source: Mercola]!

A Human's Sense of Smell Is Actually as Good as a Dog's
What are eye boogers made of?
Could Your Smartphone Cause Temporary Blindness?