Browse the article Do you really have to wait an hour after eating before swimming? 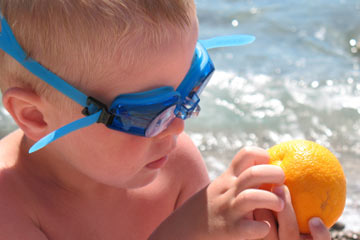 Ah, summer. The lazy days spent swinging in a hammock. The ice-cold glasses of lemonade. The backyard barbecues. The family vacation to that favorite destination. And the abject terror parents foster in their kids by telling them to steer clear of all bodies of water after eating lest they succumb to certain cramp-induced drowning.

No one is quite sure when or why parents began telling their children to wait an hour after eating before setting so much as a little toe in the pool or lake. Two popular theories abound, one biological and the other social.

First, it seems to have been believed that upon eating, most of the available blood in one's body would flood to the stomach to help with digestion. Thus deprived of proper blood flow, the limbs wouldn't have enough of the precious fluid in them to be able to execute even a simple backstroke, leaving the young swimmer to seize up with cramps and sink like a frozen ravioli in a pot of water.

The second possible origin of this myth is, perhaps, more likely. Water safety concerns were much more lax in the '50s and '60s when there were few lifeguards watching the water for potential accidents. So, parents had to maintain a constant vigil. What better way to get a respite than to tell little ones the take-an-hour-break tale? This would allow parents at least 60 minutes of peace when they most needed it -- after their bellies were full of a torpor-inducing lunch.

The "I need a break theory" certainly underpinned many a kid's sulking hour-long pool hiatus. But does the blood-flow theory hold water? Find out on the next page.

Theories about Swimming after Eating

Water-safety concerns among parents are quite justified. According to the Centers for Disease Control (CDC), 2,582 people fell victim to unintentional fatal drownings in 2005. A lot of those victims were children. But how many enthusiastically downed burgers are contributing to those statistics? Probably none.

It's true that blood flows to our stomachs after eating a big meal. While there, it gets busy absorbing nutrients, leaving less of the stuff available to deliver oxygen and remove waste products elsewhere in the body. But does is this competing demand for blood what causes cramps?

The truth is that we have enough blood to keep all of our other parts running just fine after a meal. In fact, some competitive swimmers eat something immediately before a big meet to give them the energy they need to perform well. Also, during exercise, our bodies produce adrenaline that actually helps deliver oxygen to the muscles that need it most. And even if a cramp seized a swimmer in a particular part of his or her body, it's highly unlikely that it would be severe enough to cause a drowning accident.

Of course, as with many nuggets of folk wisdom, there's a kernel of good advice within this old wives' tale. There is a difference in terms of quantity and type of food eaten and digestive speed. Simple carbohydrates like those in a bag of potato chips are more quickly broken down than the fat and protein in our much-loved burgers. So if anyone has just indulged in a big meal fresh off the grill, splashing around in the pool is just fine, but it might not be such a bad idea to wait a bit before engaging in any seriously strenuous swimming.

One theory suggests that "stitches," or cramps, are caused by the weight of a full stomach tugging on the ligaments that hold it in place. Whether or not this is true, it's a fact that a full belly can make any exerciser uncomfortable -- and in some cases can lead to vomiting.

So as long as we're not talking about world-record breaking distances, it's perfectly safe for kids to chow down and dive in. Good news for little ones, but there goes mom and dad's chance to enjoy those extra drowsy minutes on the picnic blanket after lunch.

Swimming after eating is, at most, uncomfortable. Swimming after drinking alcohol, however, can be downright deadly. In addition to the slowed reaction times and general lack of coordination it causes, booze can also increase the chance that a spasm of the vocal chords will occur if water enters the windpipe, locking the airway closed. The Centers for Disease Control (CDC) reports that up to half of all adolescent and adult deaths related to water recreation involve alcohol. So if it's to be an afternoon of swimming, remember: It's OK to say "yes" to the burgers, but it's definitely "no" to the brews.