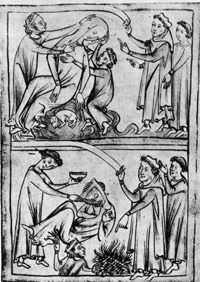 Prescription medication is commonly used to control epileptic seizures. Since seizures come in all shapes and sizes, one pill doesn't magically serve them all. Doctors and patients often engage in a tricky tango of finding just the right medication and dosage that will control seizures without causing debilitating side effects. Patients may have to try many drugs to find that winning combination of seizure control and quality of life, as many of the medications are considered disabling because they affect memory, thought and other cognitive processes.

If seizures are isolated in one part of the brain, then patients are candidates for a surgery to remove that part of the brain. For example, in an anterior temporal lobectomy, the most common epilepsy surgery, the front part of the temporal lobe is removed. Doctors can also remove parts of other lobes, or they can disconnect parts of the brain that aren't communicating properly. One such surgery is a corpus callosotomy, which cuts away the white matter connecting the hemispheres of the brain. These surgeries can be performed on both adults and children. While descriptions of removing parts of the brain may call to mind horrifying accounts of lobotomies, these surgeries remove the damaged part of the brain only, and they don't seem to result in either new seizure centers or in brain damage. Some patients show intellectual improvements after the surgery [source: Wilner].

A ketogenic diet is sometimes recommended for children with epilepsy, though it does not appear to be as effective in controlling seizures in adults. This diet is very similar to the Atkins Diet, in that no carbohydrates whatsoever are allowed. The diet is very high in fat and can be difficult to maintain. Scientists aren't sure exactly how the diet works; the seizure control may be due to a protein that occurs when the body breaks down fat.

In 1997, the FDA approved a device called the vagus nerve stimulator for people with epilepsy. The implanted device sends regular waves of electricity to the brain, much as a cardiac pacemaker creates rhythmic pulses to aid the heart. Since vagus nerve stimulation does not usually result in full seizure control, some medication may be necessary, but the lowered dosage cuts down on the wearying side effects [source: Wilner].

Some people may be able to practice a form of self-control over their seizures as they get better at predicting when an episode may occur. Some common seizure triggers include sleep deprivation, alcohol or drug use, stress, illness, the menstrual cycle and diet. When people recognize their most common seizure triggers, they may be able to block a seizure by getting more sleep, focusing on something else, moving around or even just repeating "no" to themselves [source: Devinsky].

About 25 to 30 percent of people with epilepsy continue to experience seizures even with treatment, a condition known as intractable epilepsy [source: NINDS]. Others, especially children, are able to "outgrow" epilepsy and reduce their medication levels. It's important to note that it's possible to die from epilepsy, though doctors aren't sure why, as you'll glean from the name: sudden unexplained death in epilepsy, or SUDEP.

Even when controlled, though, epilepsy can have an effect on daily life, largely due to its unpredictability. The disorder can affect all decisions, from whether to go for a swim to where you work. In the United States, each state has different rules about epileptic drivers; in some cases, a person must be seizure-free for six to 12 months before getting behind the wheel. People with epilepsy often feel a sense of social isolation, as they lack control over their brain and body and worry what others will think of their seizures.

Women with epilepsy face special challenges. Some epilepsy medications carry the risk of birth defects, but so do uncontrolled seizures while the baby is in the womb. After the baby is born, a woman may worry about her ability to care for an infant with the unpredictability of seizures; women should consult with both their neurologist and obstetrician to chart a plan of action.

To learn more about epilepsy, see the stories below.