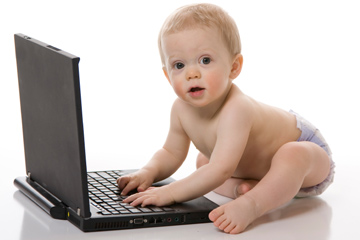 Why yes, I was breast-fed. Why do you ask? I have a dissertation to write.
© iStockphoto.com/kfleen

From 2004 to 2006, the U.S. Department of Health and Human Services ran public service announcements to encourage women to breast-feed. In one advertisement, two pregnant women engaged in a log-rolling contest, a water sport in which competitors try to stay on a moving log longer than the other person. In another ad, a pregnant woman rode a mechanical bull in a bar in front of a roaring crowd. In both advertisements, a pregnant woman experienced a violent spill, which was followed by this text: "You wouldn't take risks before your baby's born. Why start after?" An announcer's voice then beseeched women to breast-feed and rattled off some of the benefits associated with breast-feeding.

Is bottle-feeding akin to riding a mechanical bull while pregnant? In today's mommy wars, in which women pass judgment on other mothers' parenting choices, it can certainly seem so. Dictates to American women to breast-feed are nothing new -- Puritan minister Cotton Mather urged the practice in his sermons. So why did women ever start bottle-feeding at all? In the late 1880s, baby formula arrived on the market, and many American women came to believe that they were unable to breast-feed, perhaps because doctors paid off by formula manufacturers suggested as much [source Lepore]. Some women even believed they were in the midst of an evolutionary shift -- just as men had developed vestigial nipples, so too had they [source: Lepore]. Further complicating matters: The U.S. has sexualized the breast more than any other country, according to historian Marilyn Yalom [source: Harmon].

In the 1950s and 1960s, American women began reclaiming their breasts from this vestigial wasteland. The breastfeeding advocacy and support group La Leche League formed in 1958, and in the decades that followed, feminists declared that women's breasts served a purpose other than pleasing men. The 1971 book "Our Bodies, Ourselves" mentioned that breast milk could make babies healthier than formula could. Currently, the American Academy of Pediatrics recommends that mothers feed their babies exclusively with breast milk for the first six months of life.

When it first appeared on the market, infant formula seemed to have science on its side; it was a way to measure precisely how much food a baby received. Now, science seems to be on the side of breast-feeding. What do the studies say? 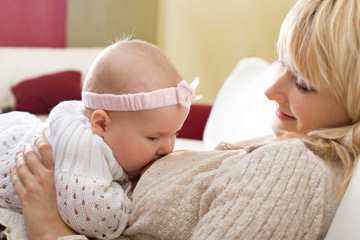 Is this breast-fed baby getting a leg up on the competition?
© iStockphoto.com/Nick_Thompson

There are numerous studies which suggest that breast-feeding can put a child at lower risk for a whole host of diseases and conditions, including sudden infant death syndrome, respiratory infections, meningitis, pneumonia, diarrhea, ear infections, asthma, diabetes, autoimmune diseases (such as Crohn's) and leukemia [source: Rabin]. Breast-fed babies have a lower risk of obesity than formula-fed babies [source: Rabin]. In fact, the American Academy of Pediatrics believes that the United States could save $3.6 billion in annual health care costs if more women breast-fed because the babies would require substantially less medical care [source: Harmon]. Breast milk derives these powers because it's full of antibodies, hormones, neuropeptides and natural opioids that formulas can't replicate.

And not only is breast-feeding believed to be good for the baby, it provides benefits to the mother as well. It helps a woman heal quickly after childbirth by causing the uterus to return to normal size and reducing bleeding. Women who breast-feed have a lower risk of heart attack, stroke, adult-onset diabetes and osteoporosis [source: Rabin]. Breast-feeding can also reduce a woman's risk of ovarian cancer and breast cancer; one study suggested that women with a family history of breast cancer could reduce their risk level, via breast-feeding, to equal that of a woman who had no family history of the cancer [source: University of North Carolina School of Medicine].

The studies on breast-feeding's benefits are so numerous that legislators have considered putting warning labels on formula packaging. But in 2009, Hanna Rosin published a piece in "The Atlantic" that dared to suggest that breast milk was not the magic elixir that its proponents claimed (the negative reaction Rosin's piece received demonstrated just how seriously the mommy wars are when it comes to the breast).

Rosin pointed out that studies regarding breast-feeding were inconsistent, and those that tout breast milk's benefits can only show an associative relationship, not a causal relationship. In other words, these studies can't say that breast-feeding caused the beneficial outcomes, only that these babies that were breast-fed also experienced them. These outcomes could be due to some other factor that breast-feeding mothers have in common. Since women who breast-feed in the U.S. tend to be older, more educated and have higher incomes than women who don't, it's possible these women are able to confer advantages upon their children that other women can't.

Additionally, studies about breast-feeding can be flawed from the start; it's unethical to tell a woman what to feed her baby, so researchers rely on observational studies with self-selecting participants. Still, there's one researcher who's managed to design some scientifically rigorous tests about breast-feeding. 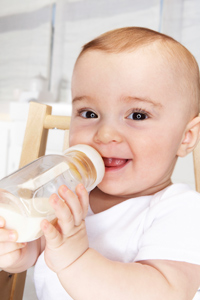 Don't count me out yet, world. Even if I do drink from a bottle.
James Woodson/Digital Vision/Getty Images

In 2001, Michael Kramer of McGill University began publishing his research about the Promotion of Breastfeeding Intervention Trial, or PROBIT, which evaluated breast-feeding's effects on 17,000 Belarusian children. Rather than telling a woman how to feed her children, Kramer used women who began breast-feeding at birth. Half of the mothers, though, were encouraged to breast-feed exclusively for much longer by a health professional, while the other half received no such intervention. The women who received more information breast-fed their babies for much longer, allowing researchers to study extended exposure to breast milk.

So far, Kramer's research has shown that breast-feeding is a little bit better than formula-feeding, but it's not the universal panacea that its supporters claim. Extended breast-feeding can reduce the risk of eczema, and it can also reduce the risk of gastrointestinal infection during the first year of life by 40 percent [sources: Rosin; Kramer et al.]. Perhaps most notably, Kramer found that breast-fed babies scored higher on IQ tests; these children scored 7.5 points higher on tests measuring verbal intelligence and 2.9 points higher on tests measuring non-verbal intelligence at the age of 6 and a half [source: Doheny]. Despite the excitement this news generated in parenting circles, Kramer called the effects "modest," pointing out that 7.5 points was "not the difference between a genius and a mentally retarded child" [source: Doheny].

Kramer has suggested that breast-feeding's benefits may not come from the breast milk, but rather from the time mothers spend interacting closely with their child. When Hanna Rosin of "The Atlantic" spoke to Kramer, he talked about how rats lick and groom their pups, suggesting that it's the physical act of breastfeeding, as opposed to the breast milk itself, that gives children a leg up in the world. Such a distinction is important, because many women in the United States pump their breast milk and feed it to their children via a bottle. Are these women wasting their time?

Breast or Pump: Does It Matter? 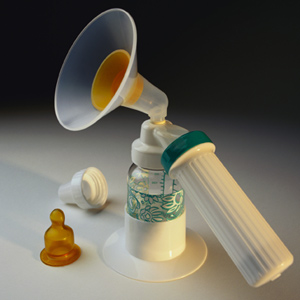 The American Academy of Pediatrics recommends exclusive breast-feeding for an infant for at least six months, yet most women don't reach this milestone. That's because the typical maternity leave in the United States is 12 weeks. In order to return to work, many women begin using breast pumps to express milk, which keeps their supply flowing and provides bottles full of the magical elixir of breast milk. Some women who have trouble breast-feeding may always use pumped breast milk to feed their babies.

When the breast milk doesn't come straight from the breast, it's possible that it may not have as many benefits. Take, for example, obesity. Studies show that breast-fed babies have a lower risk of being overweight; scientists say that breast-feeding makes a woman more attuned to when a child is full so that she doesn't overfeed him or her. In one study, babies who were fed with bottles tended to be overfed, no matter if the bottle was full of formula or breast milk [source: Temple University]. And again, it's impossible to tell if a lower risk of obesity in breast-fed children is due to the breast milk or to another factor in the child's upbringing.

In another study, which suggested that breast-fed babies coped better with stress than bottle-fed babies, researchers took pains to emphasize that the results may not be due to breast milk, but to the role of mother-child interaction in shaping neural pathways [source: BMJ Specialty Journals]. Like Michael Kramer, these researchers used interactions between animals as the basis for their finding.