Raising a Child with Tourette Syndrome: One Family's Story 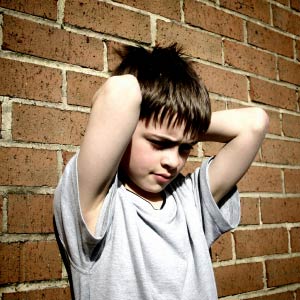 It isn't easy being different.
©iStockphoto.com/duncan1890

Raising any kid is a challenge, but raising a kid with a little-understood medical condition, such as Tourette syndrome, is even harder.

Tourette syndrome causes physical and verbal tics -- brief episodes of uncontrollable muscle movement or repetitive spoken outbursts. These symptoms usually show up between the ages of 6 and 10, and they peak during adolescence. Rapid eye blinking, hand flapping and throat clearing are common tics in children, although tics (and their severity) vary from kid to kid. A child may have a number of core tics that stay with him or her consistently, but others may appear and disappear in cycles. Often, the symptoms decrease or even disappear altogether as children move into adulthood.

Boys are more likely than girls to have Tourette syndrome and also to have more severe forms of it. Children with the condition are often diagnosed with obsessive-compulsive disorder (OCD), as well, though the link between the two isn't well understood.

That's the case with Jaylen Arnold, a 9-year-old boy with severe Tourette syndrome, OCD and Asperger's syndrome. Unlike most children with Tourette syndrome, Jaylen started experiencing symptoms very early in life -- his first tic developed at age 2. His tics come pretty fast and furious, and when they do, his body is involuntarily thrust into contortions, with a variety of barks and other verbal tics bursting from his mouth.

Between tics, Jaylen is a bright, affectionate boy who's often more concerned for the well-being of those who watch him "ticcing" than he is for himself. Jaylen knows he has a severe form of the condition and isn't counting on it going away as he gets older. But his medical conditions haven't kept him from achieving his goals. He regularly speaks to auditoriums filled with as many as 1,000 students and educators, sharing his experiences dealing with adversity -- and bullies -- in hopes of making life better for others who are misunderstood or singled out for their noticeable differences. When not playing with his little sister or friends, he makes time to grant media interviews to the likes of Katie Couric, to film PSAs with celebrities who also have the syndrome, and to interact with thousands of people on his Web site, www.jaylenschallenge.org. And Jaylen probably has 10 times as many followers on Twitter as you do.

But the journey has been, and continues to be, quite hard for both Jaylen and his parents.

The Difficulty of Diagnosis 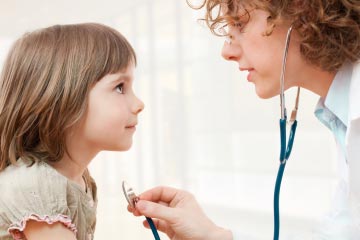 Sometimes, the answer to the riddle of a child's symptoms is elusive.
©iStockphoto.com/creo77

For starters, Tourette syndrome is a difficult condition to recognize and diagnose. Jaylen's mother, Robin, noticed his first verbal tic when he was still a toddler. Every time they were in the car together, he complained of a scratching sensation. She changed his clothing, diapers and car seat, but it didn't help. Doctors tested him for a variety of illnesses but couldn't find a physical cause for the scratching.

Jaylen soon exhibited one of the most common simple tics: repetitive eye blinking. An eye specialist examined him and found nothing wrong. Another tic soon followed that the family nicknamed "baseball signs" -- involuntary hand movements that look like a third-base coach's signals to a player during a baseball game. Again, Jaylen's doctors and parents remained stumped.

At age 3, Jaylen developed another verbal tic, a made-up sound similar to "Oh no." It was then that a pediatrician put all the clues together and diagnosed him with Tourette syndrome.

Jaylen's parents were crushed by his diagnosis. They worried about his health and the effect it would have on his happiness throughout his life. Jaylen's mother learned as much about the condition as she could, becoming something of an expert on it. She said that this knowledge of what her son was dealing with gave her a sense of empowerment and control. After all, parents have to take the lead in directing their children's care -- no one but you is aware of all the different doctors and diagnoses, not to mention insurance bills and your child's full medical history.

Next, we'll talk more about Jaylen's family and how they've learned to cope with the difficulties of Tourette syndrome.

Many families of children with Tourette syndrome don't live close to specialists with experience treating the condition. For several years after his initial diagnosis, Jaylen's family had to drive an hour and a half one way in order to see a specialist, despite living in a heavily populated county. Eventually, a specialist happened to move closer to their home, putting the care Jaylen needed within closer reach.

Though familiar with the syndrome, many doctors and other health care workers have never actually had contact with a patient with Tourette syndrome. In fact, when Jaylen goes to various hospitals for testing and treatment, he often becomes something of a minor celebrity among the doctors and nurses throughout the hospital.

As unique as Jaylen's situation is, his parents must balance his needs with those of his younger sister, who doesn't have Tourette syndrome. Jaylen's parents make an extra effort to ensure she receives as much individual attention as possible, so that her life doesn't occur in the background of her older brother's medical condition. Balancing competing needs of siblings of children with Tourette syndrome is a difficult task for any family, but in time, these adjustments become part of the fabric of daily life.

Like any younger sibling, she looks up to Jaylen and basks in the attention he gives her (even occasionally mimicking his tics, as any younger sibling copies the actions of an older sibling). But unlike most other younger siblings, she's had to adapt her life in certain ways because of Jaylen's needs. She doesn't tap her foot on the floor to the beat of a song, knowing it could set off his tics or OCD habits, and she knows that if she puts her hand on a surface or writes with chalk on a chalkboard, he will be compelled to wipe it.

Next, we'll talk about how children with the condition are often confronted with teasing, how it affects their condition, and how it can be dealt with. 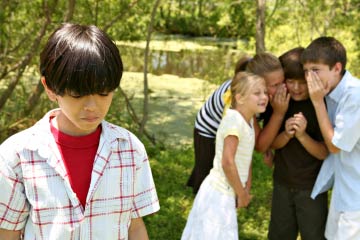 While children with Tourette syndrome may experience near-constant tics, their minds and scholastic abilities are just as sharp as those of their peers. However, many teachers and administrators don't understand the condition well. Administrators may suggest putting the child in a special-needs class with students who have cognitive difficulties or learning disabilities. Teachers may treat him or her differently than they do other students or classify tics as class disruptions and punish the child accordingly.

Jaylen started his schooling in a private school that was well suited to his needs, but he eventually wanted to try attending public school. His parents agreed to give it a shot.

He tried to hold in his tics at school, but it's impossible to do for long. Jaylen compares it to stifling a sneeze. You may succeed for a few moments, but eventually, that sneeze is going to come out.

One day, unable to suppress his tics anymore, Jaylen began doing his "Oh no" tic. His classmates mimicked him, and soon, the whole class was laughing while a flummoxed substitute teacher attempted to restore order. Jaylen finally shouted, "It's not funny!" and a new verbal tic was born.

Like many kids who are mocked and made miserable in school, he went out of his way not to bring the bullying to the attention of teachers or adults. His stock answer when asked how he was doing was that everything was OK. His responses gave school officials the confidence to reassure his mother that the school environment wasn't adversely affecting his condition.

But, of course, it was. Tics kick into overdrive when kids are excited, upset or otherwise psychologically stimulated. Even after they've calmed down, it can take many weeks for the tics to return to their usual level. Jaylen's became so intense and constant that it took him 10 minutes to tell his mother in three sentences how his day went. He was literally chewing through the lapels and shoulders of his shirts, which needed constant replacement. (Though this seems like a nervous response, his shirt-chewing was actually a tic; it required a dental intervention due its frequency and intensity.) Jaylen was ticcing so hard that he was striking himself in the ribs, leaving bruises. His muscles ached, and he was constantly sore to the point of not being able to sleep at night.

His parents withdrew him from school, and Jaylen stayed home for several months until the cycle of heightened ticcing ran its course. When the tics eventually calmed down, his parents re-entered him into a private school. With a better student-to-teacher ratio, an understanding and supportive administration, and the presence of friends who had grown up with him, Jaylen was happy and productive once again.

Next, we'll talk about some methods for helping a child with Tourette syndrome.

It's important to give a child with Tourette syndrome a sense of purpose and a way to build self-esteem and confidence. For Jaylen, that meant setting up a Web site as a response to the bullying he encountered. Through his outreach efforts online, Jaylen is working to change the way others perceive the syndrome and deliver a strong anti-bullying message. He and his family now view his condition as a blessing that enables him to help others who share his experiences, either as a child with Tourette syndrome or as the target of bullying.

As far as treating Tourette syndrome, no cure exists, but there are some options available that can help.

Behavioral therapy focuses on relaxation exercises and OCD-related behaviors. Habit-reversal therapy aims to replace tics with less noticeable actions, or to teach people to suppress them altogether. While habit-reversal therapy didn't work for Jaylen, adopting a gluten-free diet did seem to help, and massage therapy allowed him to get some meaningful rest.

Every parent of a child with Tourette syndrome discovers little tricks that work for their child. During his "Oh no" tic, Jaylen also touched one of his ears. His mother discovered that she could use his preoccupation with keeping things even, an element of his OCD, to counteract the tics. She pointed out that he didn't touch his other ear during these tics. While he was considering this, she proposed that in order to eliminate the need to even things up by touching his other ear, he could just turn down the volume on the ear he did habitually touch -- and reduce the need to touch it. It's the type of unique solution that only a parent could discover.

Meeting and networking with other parents is a good way to share information, but it's also a chance to talk to other people who understand your experience raising a child with Tourette syndrome. You're not alone with the worries and difficulties involved. While this condition in a child can cause plenty of worry and heartache for a parent, it can also be an experience of hope, love and triumph, as is the case of Jaylen, who enjoys going to school, hanging out with friends and family, finding purpose in reaching out to others, and making big plans for his future.

Why do lullabies work?
Miscarriage Symptoms, Causes and Treatment
What is the average teens weight and height?