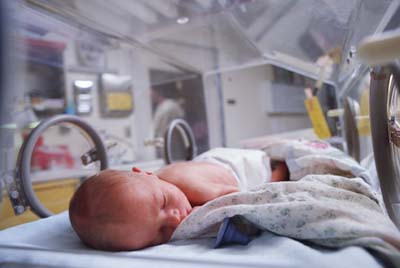 Several diseases are more pronounced during pregnancy, and several more affect only pregnant women. Diabetes is no longer a life-threatening complication, but can lead to abnormally small babies.
Publications International, Ltd.

The majority of women enter pregnancy healthy and remain so until delivery of the baby. Aside from a variety of minor problems -- for example, backache, morning sickness, and constipation -- the woman generally tolerates the many changes in her body that result from pregnancy. In some cases, however, either the mother enters pregnancy with a medical problem or a problem develops during pregnancy. Some of these conditions affect only the mother, while others may affect both mother and baby.

Toxemia of pregnancy is a severe condition that sometimes occurs in the latter weeks of pregnancy. It is characterized by high blood pressure; swelling of the hands, feet, and face; and an excessive amount of protein in the urine. If the condition is allowed to worsen, the mother may experience convulsions and coma, and the baby may be stillborn.

The term toxemia is actually a misnomer from the days when it was thought that the condition was caused by toxic (poisonous) substances in the blood. The illness is more accurately called preeclampsia before the convulsive stage and eclampsia afterward.

The causes of preeclampsia and eclampsia are not clearly understood. They tend to develop more often in women who are having their first baby, especially teenage mothers and women from lower socioeconomic groups. One theory proposes that certain dietary deficiencies may be the cause of some cases. Also, there is the possibility that some forms of preeclampsia and eclampsia are the result of deficiency of blood flow in the uterus.

The symptoms of toxemia of pregnancy (which may lead to death if not treated) are divided into three stages, each progressively more serious:

Preeclampsia and eclampsia cannot be completely cured until the pregnancy is over. Until that time, treatment includes the control of high blood pressure and the intravenous administration of drugs to prevent convulsions. Drugs may also be given to stimulate the production of urine. In some severe cases, early delivery of the baby is needed to ensure the survival of the mother.

There is no known preventive for toxemia of pregnancy. Though the restriction of salt in the diet may help reduce swelling, it does not prevent the onset of high blood pressure or the appearance of protein in the urine. During prenatal visits, the doctor routinely checks the woman's weight, blood pressure, and urine. If toxemia is detected early, complications may be reduced.

Learn about other medical conditions during pregnancy next.