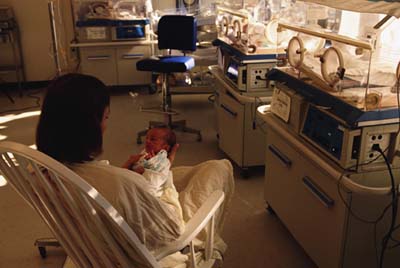 If you go into labor before your 37th week, you should go to the hospital immediately. Find out why premature birth is dangerous to the baby.
Publications International, Ltd.

Premature birth can be very dangerous to a newborn because it might not be developed enough to survive outside of the womb -- for example, if the lungs are not yet able to breathe. There are several reasons it happens, most of which the mother has no control over. If you suspect that you are going into labor prematurely, you should go to the hospital immediately because labor can be stopped up to a certain point.

A preterm, or premature, delivery is defined as the birth of a baby between the 20th and 36th week of pregnancy. A baby born during this time is called premature. About 11 to 12 percent of deliveries in the United States are classified as premature; however, preterm deliveries are on the increase because more women are giving birth to multiple babies.

A preterm delivery occurs because the mother goes into labor too early. Though in most cases there is no clear reason, abnormally early labor is often associated with the following conditions:

The major complication of preterm delivery is the birth of a baby who is unable to survive outside the mother's body. Though the baby's organs may all be correctly formed, his lungs may not be mature enough to allow him to breathe adequately after birth. Recent advances in the care of premature infants have allowed babies as small as 11/2 pounds to survive and grow up normally. Despite these advances, prematurity remains the leading cause of newborn death.

If you suspect you are in labor before the 37th week of pregnancy, you should call your doctor and go to the hospital immediately. The doctor will check the cervix to determine if it has dilated. An electronic monitor may be used to detect contractions.

Several different drugs may be used to stop the uterine contractions of premature labor. These drugs are initially given intravenously or subcutaneously (under the skin), and some may be given orally once contractions have stopped. Once it has been determined that contractions have stopped, you may remain in the hospital for two to three days to make certain that contractions do not start again. Once you go home, a doctor will generally advise you to restrict physical activity, refrain from sexual intercourse, and rest in bed as much as possible.

Drugs used to stop preterm labor are more likely to be successful if the cervix has not dilated more than 4 centimeters (11/2 inches). If the cervix has dilated any more, most attempts to stop labor fail, and the baby will be delivered prematurely. This is one of the reasons why it is important to report to the hospital immediately if you suspect premature labor.

On the other side of the spectrum, a postterm birth can also put the newborn baby at risk. Find out how on the next page.