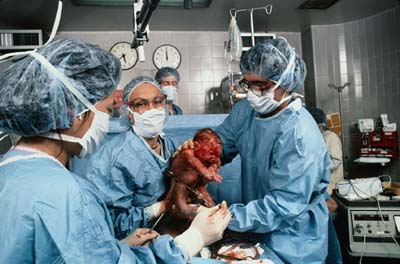 Vaginal bleeding during pregnancy can be a sign of a problem with the placenta. Find out what to do about placenta previa and placental abruption.
Publications International, Ltd.

In placenta previa, the placenta is located low in the uterine cavity, partially or completely covering the opening of the cervix. As the lower portion of the uterus stretches and dilates during the latter weeks of pregnancy, portions of the placenta may be torn from their attachment to the wall of the uterus. This leads to variable amounts of bleeding, ranging from light to profuse.

The exact cause of placenta previa is unknown. It is the leading cause of vaginal bleeding during the second and third trimesters.

The major symptom of placenta previa is painless vaginal bleeding. This bleeding may begin as early as the 24th to 26th week of pregnancy, though it is more common during the last 4 or 5 weeks. The blood is usually bright red, indicating the bleeding is fresh. This bleeding occurs without any previous injury (for example, from a fall). In some cases, the blood flow is light (referred to as spotting). Abdominal pain or cramping generally does not accompany the bleeding unless the woman is in labor.

Any vaginal bleeding during pregnancy is abnormal and should be reported to the doctor immediately. The doctor orders an ultrasound image of the mother's abdomen to locate the placenta. In most cases of placenta previa, the ultrasound shows the placenta covering part or all of the opening of the cervix.

Bleeding from a placenta previa may be extremely heavy, leading to severe blood loss from the mother. This bleeding stops only after the baby has been delivered and the placenta has been removed. Unless treatment is rapid in the case of heavy bleeding, death of both the mother and the baby may result.

Since the placenta covers part or all of the opening of the cervix, a normal vaginal delivery cannot be attempted since extreme hemorrhage will occur. For this reason, babies of most mothers with placenta previa are delivered by means of cesarean section.

Once placenta previa has been diagnosed, the doctor recommends the best treatment -- either delayed or active. Delayed treatment involves admitting the woman to the hospital, keeping her on bed rest, and closely monitoring her for any recurrence of bleeding. The purpose of delayed treatment is to give the fetus time to mature so that it can survive outside the mother's body. Once the maturity of the fetus has been established, delivery is by means of cesarean section. In the case of active treatment, the baby is delivered by means of cesarean section as soon as possible.

After delivery of a baby, the uterus begins to contract, separating the placenta from its wall and pushing it into the vagina. In the case of placental abruption, the placenta begins to separate from the uterine wall before the delivery of the baby. This occurs to some degree in about 1 of every 150 pregnancies.

The major symptoms of placental abruption are vaginal bleeding and strong, continuous pain over the uterus and sometimes across the back. Bleeding may be as slight as a tablespoon or extremely heavy. In some cases, no bleeding is visible, and the only symptom is pain. If blood loss is great, the woman experiences rapid heartbeat, difficulty breathing, fainting, and even shock.

The diagnosis of placental abruption is made on the basis of the woman's history and the doctor's findings of blood in the vagina and a tender, painful uterus. No specific tests can diagnose placental abruption. In most cases, even the findings on ultrasound are normal.

Bleeding associated with a placental abruption may be extremely heavy and, without rapid treatment, may lead to death of both the mother and the fetus. Even if the mother does not bleed heavily, the placenta may separate from the wall of the uterus to an extent that the fetus does not receive a sufficient oxygen supply to survive. In some cases, the mother's blood may fail to clot normally, leading to even more profuse vaginal bleeding.

The treatment of placental abruption may be either delayed or active. If vaginal bleeding is slight or has stopped and the fetus remains unharmed, the mother is admitted to the hospital for observation until all signs of placental abruption have stopped. If, on the other hand, vaginal bleeding is heavy or the fetus shows signs of lack of oxygen, delivery must occur quickly. A mother who is already in labor is monitored closely and may expect to give birth vaginally if she and the fetus remain stable. In the case of heavy bleeding, a cesarean section is performed immediately. Before or after delivery, the mother may require a blood transfusion if she experiences severe blood loss.

Each of these conditions can lead to a cesarean section. Continue reading to find out more about this extremely safe procedure.