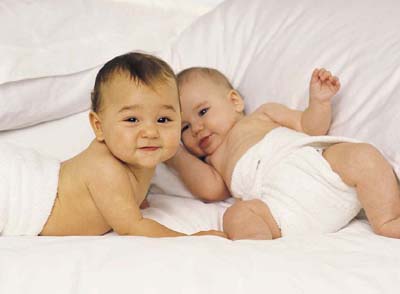 Multiple births can be a joyous occasion, but they are not without peril.
Publications International, Ltd.

Twins and triplets are often seen as an additional blessing on a growing family. But multiple births also can cause complications, the most serious of which is premature birth. Because the babies may not be ready to live outside the mother's womb, treatment of multiple births mostly involves preventing premature labor, and lots of bed rest is a common method.

Multiple births occur more commonly in older women; women who have had at least one previous pregnancy; women who have a family history of multiple pregnancy on the mother's side of the family; and women who have taken fertility drugs to stimulate ovulation (the expulsion of an egg from the ovary).

There are two types of twins. One type starts from a single egg, which divides in two very early after fertilization. Because a single egg is fertilized by a single sperm before this division, the two offspring will be of the same sex and alike in skin, hair, and eye color and in general appearance. They are identical twins.

An extremely rare form of identical twinning is called conjoined, or Siamese, twinning. In these unfortunate cases, the twins are attached to each other at the head, chest, abdomen, or back. Surgical separation may be successful but often results in the death of one or both babies.

The other type of twinning is the result of fertilization of two eggs by two different sperm. Twins of this type -- called fraternal twins -- may be of the same sex or of opposite sexes and bear no greater resemblance to each other than any other brothers and sisters. Most twins that result from the use of fertility drugs are of this type.

Approximately one third of twins are identical, and two thirds are fraternal.

One or more eggs may be involved in other forms of multiple pregnancy. For example, quadruplets may result from one, two, three, or four eggs.

In most cases of multiple birth, the cause is unknown. Why certain families have many sets of twins is also not understood. Fertility drugs used to stimulate ovulation are often associated with multiple births -- sometimes up to eight fetuses.

Doctor and patient alike often suspect multiple pregnancy when the woman's uterus grows more rapidly than one would expect with one baby. Confirmation comes when the doctor hears two separate fetal heartbeats or an ultrasound shows two or more fetuses.

The major complication of multiple pregnancy is premature labor, with the delivery of small, premature babies who are not yet ready to live outside the mother's body. In general, the more fetuses a woman is carrying, the earlier in pregnancy she is likely to go into labor. Other complications that may affect the mother are anemia and preeclampsia. Women with multiple pregnancies are very carefully monitored.

The doctor's special care of a woman with a multiple pregnancy aims at preventing premature labor and detecting and treating anemia and preeclampsia. When multiple pregnancy is diagnosed, the woman is advised to avoid strenuous activity and rest in bed as much as possible. She may even be admitted to the hospital weeks before the expected delivery date. Prenatal visits are more frequent than usual (at least once a week) so the doctor can detect the early stages of premature labor and preeclampsia.

The position of the twins in the uterus is quite variable: both babies may be head first, the first baby may be head first and the second may be breech (buttocks or legs first), the first may be breech and the second may be head first, or both may be breech. If both are head first, doctors usually allow a vaginal delivery. When the babies are in other positions, however, a cesarean section is usually performed to ensure a safe delivery of both babies. Because of the serious problems that may be encountered in the vaginal delivery of other types of multiple pregnancies, most pregnancies involving three or more babies are delivered by means of cesarean section.

A cesarean section may be necessary for multiple births, and is almost always necessary when there are complications with the placenta. Read on to learn about these conditions.