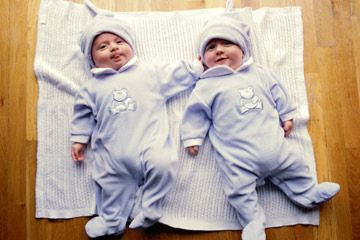 Sometimes, two dominant follicles develop eggs and ovulate. If both are fertilized and subsequently implanted in the uterus, two embryos develop: twins. Because they developed from separate eggs that were fertilized by different sperm, they are called fraternal twins. Fraternal twins do not share any more genetic information than siblings born separately.

In addition, the two daughter cells that remain after a fertilized egg undergoes its first division may separate and divide independently of each other. When this happens, they remain loosely connected while in the Fallopian tube, and the two blastocysts implant together in the uterine wall. They develop into two separate embryos. Because these embryos came from the same fertilized egg, they share identical genetic material and are called identical twins.

The chance of having twins skyrocketed between 1980 and 2004, when the rate of twin births in the U.S. increased by 70 percent [source: March of Dimes]. Researchers attribute this jump to the increased use of fertility drugs and treatments, which can increase the chances of multiple births. However, in recent years, the rates of twin births have stabilized, likely due to increased knowledge and more precise application of reproductive technology. According to the most recent data from the Centers for Disease Control and Prevention, in 2008, there were 32.6 twin births for every 1,000 births, for a total of 138,660 sets of twins born [source: CDC].