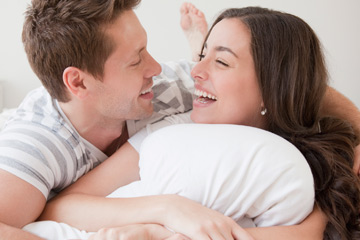 Forget what you've read about certain sexual positions ensuring a boy or a girl -- just have fun.
Jamie Grill/Iconica/Getty Images

So far we've talked about sex cells and sex organs, and you might be wondering when we'd get around to the act of sex itself. Well, here we go -- the moment when the male and female sex organs and sex cells get together. While there are many ways in which a man and a woman can engage in sexual behavior together, vaginal intercourse, in which a man's penis is inserted into a woman's vagina, is the method by which sperm meets egg.

As we've discussed, the male and the female reproductive system are designed to work together for this purpose -- the penis becomes erect to facilitate entrance to the vagina, for example, and both men and women excrete fluids that make that passage easier. These steps are part of the sexual response cycle. Both men and women experience the various phases of the cycle, from excitement to plateau to orgasm to resolution.

During the first two phases, both men and women's bodies are undergoing physical changes which include increased blood flow to the genitals as well as an increase in pulse, blood pressure and body temperature. As intercourse continues, the man reaches a point at which muscle contractions in the epididymis, prostate and seminal vesicles propel semen from the penis into the woman's vagina. The man's orgasm almost always happens at the same time as this ejaculation, and after that, the man begins to enter the resolution phase. Men and women experience the sexual response cycle at different speeds, so a woman may not experience an orgasm at the same time as a man, which has led to speculation that the female orgasm is a "happy accident," as it's not necessary for fertilization. Some researchers, however, believe that if a woman orgasms when a man does, the muscle contractions in her body will cause the cervix to dip and contract, making it easier for the sperm in the semen to begin their journey.

And what a journey it is -- on the next page, we'll consider the incredible odds against the sperm fertilizing an egg.

How Pregnancy Works
In Vitro Fertilization Overview
Can a woman get pregnant during her period?