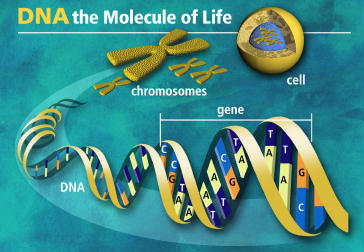 From the time of puberty on, men make sex cells (in the form of sperm cells) continuously. In contrast, by the time a woman is born, she has made all of the eggs that she will ever have. As she reaches puberty, the eggs begin to develop and get released, and this process continues until menopause. In both males and females, the production of sex cells involves meiosis, a type of cell division whereby our two sets of genetic instructions are reduced to one set for the sex cell.

Each cell in the human body is made up of 46 chromosomes -- 23 from the mother's egg and 23 from the father's sperm. These human chromosomes are X-shaped, except for the male Y chromosome. When the body produces sex cells, like sperm or eggs, there are 46 chromosomes present, but since the sex cell will merge with its counterpart, only 23 are needed. The body must then reduce the number of chromosomes by half to go into the sex cells.

To do this, it randomly sorts chromosomes from both sets in one cell division and then reduces them by half in another. Therefore, each sperm or egg that the body produces is unique -- it contains a different mix of the mother's and father's genes. This is why two brothers in the same family can look and act totally different from one another even though they come from the same parents -- it all depends on which genes (chromosomes) were randomly chosen when producing the sex cells of the mother and father.