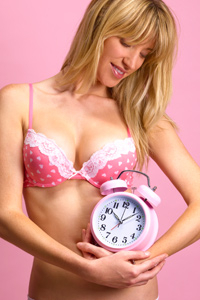 Timing is everything when it comes to female fertility.
Peter Dazeley/Photographer's Choice/Getty Images

Remember that, biologically, the main goal of sexual reproduction is to have the sperm combine with the egg to make a baby. With respect to the man, age is not critical. Most men are capable of producing sperm that can fertilize an egg at any time from the onset of puberty until they die; there have been cases in which men in their 70s and 80s have conceived children with younger women. Women, on the other hand, have something of a limited window for fertility. They typically can release fertilizable eggs from the time of puberty until their late 40s or early 50s. After that time, their ovaries stop releasing eggs and they undergo various biochemical and physiological changes, the sum of which is called menopause.

Although women are capable of conceiving a child from puberty to menopause, the timing of sexual intercourse is critical to the success of sexual reproduction. Women have an ovulatory -- or menstrual -- cycle, made up of complex physiological and biochemical changes that are linked to the timing of reproduction.

In the first phase of the menstrual cycle, a follicle (the cell complex that surrounds and nurtures the egg) grows in the ovary, while the lining of the uterus builds up to receive a fertilized egg. At mid-cycle, when the egg is ready, the ovary releases the egg. This stage is called ovulation, and is the optimum time for fertilization to take place. The egg enters one of the Fallopian tubes on its way to the uterus. In the last phase of the menstrual cycle, one of two things happens: If the egg is fertilized, it continues on to the uterus, attaches to the lining and pregnancy begins, but if the egg is not fertilized, the uterus sheds its lining and the now-dead egg, menses begins and another menstrual cycle ensues.