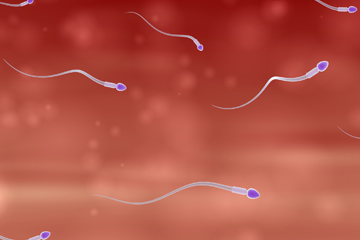 Sperm on the hunt for an egg
Ingram Publishing/Getty Images

Fertilization is the union of sperm and egg and the fusion of the chromosomes necessary for the formation of an embryo. Though some people who find themselves pregnant may think that the process is all too easy, it's actually a remarkable feat for a sperm to fertilize the egg, as the odds are stacked against it.

The average ejaculation contains about 150 million sperm, but the majority of them will prove unfit for travel; researchers have found that about 85 percent of sperm have an abnormality that will prevent it from reaching and fertilizing the egg [source: Angier]. The vagina and cervix do their part to encourage the sperm, emitting chemical signals that show the path for the seminal swimmers.

It's a race against time, however: The journey to fertilization must be completed within 12 to 48 hours, before the sperm die. And timing is crucial on the other end, as well. For fertilization to take place, sperm must be present either a couple of days prior to or on the day of ovulation.

Sperm must first cross the barrier of the cervix, which will be thin and watery if the woman has just ovulated. Once the sperm have traversed the cervical mucus, they travel up the moist lining of the uterus into the Fallopian tubes. Since only one of the Fallopian tubes contains an egg, many sperm travel in the wrong direction. Fewer than 1,000 sperm out of the millions in the semen reach the Fallopian tubes, and only a few dozen actually reach the membrane of the egg.