Browse the article 5 Skin Disorders You Might Mistake for Hives 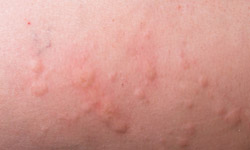 Red or swollen, itchy bumps on your skin could be hives, or it could easily be a similar-looking condition. See more pictures of skin problems.
iStockphoto/Thinkstock

Self-diagnosis of skin disorders is never an easy task. It's made more difficult when different conditions have similar symptoms. Hives, for example, come in two types -- acute and chronic -- and are usually caused by your body releasing histamine in reaction to an allergy. Histamine is an organic compound in your body responsible for triggering the inflammatory process. With hives, the histamine causes fluid to release from the blood vessels and makes the skin swell [source: Rockoff].

It can be easy to mistake hives for other disorders because the allergy triggers can be difficult to find. Another problem with diagnosing hives is that the symptoms are relatively generic -- red, itchy welts on your skin are a common symptom among many skin disorders.

Hives can be caused from allergens as well as physical and environmental factors such as stress, heat, sunlight or water. Untreated, the symptoms can last from a couple hours up to six weeks. As we'll see throughout this article, many skin disorders share these causes and triggers, so close attention to detail is key when figuring out the mystery of your skin disorder.

Because blood and allergy tests exist to confirm hives at the doctor's office, and antihistamines are readily available over the counter, determining the diagnosis and appropriate treatment might seem easy. However, since many of these disorders show the same symptoms and have different treatment methods, it's important to be aware of the similarities and differences between them. So, read on to learn about five common skin disorders that may look and feel a lot like hives. 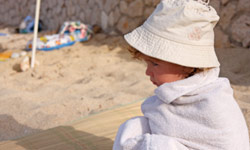 Overdressing babies when they're out in the sun can cause heat rash, because babies' sweat ducts aren't as developed as adults'.
Hemera/Thinkstock

Heat rash develops when sweat ducts are blocked in hot temperatures, and it commonly happens to infants because their sweat ducts aren't as developed as adults. It can occur when a baby is overdressed for weather, when heavy creams or clothing block the pores or during physical activity that causes sweating [source: Family Doctor].

Most cases of heat rash will disappear in a couple days if you air dry the skin, loosen and remove clothing and keep the temperature controlled whenever possible. If those things don't work, you can apply calamine lotion or hydrocortisone cream to calm the rash, but you'll want to avoid other types of lotions or ointments because they can act as an irritant on the sensitive skin [source: WebMD].

Contact dermatitis can be confused with hives on first glance because it shares many of the same symptoms. The red rash and bumps are accompanied by itchy, dry skin. The only difference is that hives can show up on several areas of the skin, but contact dermatitis appears only on the areas that are exposed to an allergen or an irritant. It generally lasts about the same length of time as hives, usually resolving itself without medication in two to four weeks.

Much like hives, the treatment will come from antihistamines. You'll also need to avoid the irritant to prevent future outbreaks. If the symptoms are mild to moderate you can usually get away with applying a wet compress to the affected area or using an anti-itch cream [source: Mayo Clinic].

Contact dermatitis can be divided into two different types:

Allergic contact dermatitis is the result of skin contact with an allergen such as weeds, perfume ingredients, metal jewelry, poison ivy, nickel and many others. This contact causes a red rash, bumps and sometimes blisters.

Irritant contact dermatitis, the more common of the two, is caused by repeated contact with a substance that rubs and damage the surface of the skin. These substances can include things like cosmetics, soap, deodorant and jewelry, and it usually affects the skin with red, dry, itchy patches.

Although hives is rarely a chronic disorder, rosacea is always one. It may start out similar to a case of hives on your face -- rosacea features small, red bumps on the nose, cheeks, forehead and chin as well as reddened areas across the face. But the similarities stop there.

Before the onset of rosacea, you may begin to notice that you blush easily and the redness continues across your face. When rosacea is inflamed, the small, red bumps crop up on the skin [source: National Rosacea Society]. Unlike hives, though, which can affect different parts of the body, rosacea is limited to the face.

The cause of rosacea is unknown, but it may have roots in hereditary factors as well as environmental ones. That said, there are certain things that aggravate the condition, such as exercise, consuming hot foods or alcohol, or exposure to sunlight, heat or stress [source: Mayo Clinic].

There is no complete treatment for rosacea, but there are topical and oral medications that have been known to help lessen its effects. Antibiotics may be prescribed both as an oral and topical measure, while certain topical treatments like benzoyl peroxide and azelaic acid might be prescribed to keep inflammation and redness down.

Rosacea in the Eyes

Ocular rosacea, another type of the condition, can occur in the eyes. It can cause the eyes to be watery and bloodshot and occasionally burn or itch, but it can be treated [source: National Rosacea Society].

Atopic dermatitis, the most common type of eczema, is aesthetically similar to hives at first glance. Eczema's symptoms include red patches of itchy skin often accompanied by small, raised bumps and cracked skin. As is the case with hives, it tends to appear behind the knees, around ankles, wrists, face, neck and the upper chest area, and it can even affect the area around your eyes, including the eyelids. Unlike hives, though, eczema doesn't go away permanently.

Although the exact cause of eczema is unknown, it's thought to be linked with dry and irritated skin as well as an overactive immune system, which may cause the body to trigger allergic reactions when they're not necessary. It's also commonly linked with Staphylococcus bacteria, which can increase the severity of the symptoms. The symptoms can also be worsened by stress, sweating, dry skin, low humidity, dust, cigarette smoke, foods and wool or manmade clothing.

Eczema might look like hives on the surface, but where treatment is concerned, it's completely different. Even though eczema has been associated with allergies, getting rid of allergens is rarely helpful to the condition. Treatment is limited to things that lessen the pain of eczema, including corticosteroid creams and antihistamines to relieve itching, oral corticosteroids to decrease inflammation, and immunomodulators, which work with the immune system to reduce flare-ups. Light therapy is also known to be effective in dealing with eczema because ultraviolet rays can slow the inflammatory process [source: WebMD].

Eczema can appear at any age but tends to show up for the first time in children under the age of 5. It is estimated that between 10 to 20 percent of the world's population develops it at some point in their lives [source: American Academy of Dermatology].

The cause of pityriasis rosea is unknown. No bacteria, fungus or virus has been attributed to its onset [source: Lichenstein]. It is possible that certain types of herpes may play a role, but no definitive cause has been found.

Generally, pityriasis rosea will go away on its own in four to six weeks, but in certain cases, a doctor may treat the rash. Certain antiviral medications are known to reduce the duration by a couple weeks, but usually oral antihistamines and steroid creams are prescribed to help counter the itching.

If you'd like to learn more about hives or other skin infections, you'll find more information on the next page.

Pityriasis refers to the flaking of the skin and has several different incarnations other than rosea. One of the most commonly known disorders that fall under this classification is pityriasis capitis, a type of dandruff.