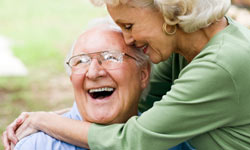 How do you see yourself aging?
©iStockphoto.com/stevecoleccs

When Americans think about old age, we tend to predict a slowdown, picturing ourselves in rocking chairs or perhaps in front of the television -- which frequently depicts aging as bad and the elderly as ridiculous. Members of the Tarahumara society in Mexico, on the other hand, believe that they gain strength as they age -- and in their 60s remain able to run hundreds of miles while playing a long-distance version of kickball [source: Martinez]. The lesson? The way we view the aging process may very well influence how we ourselves age. Research has linked negative perceptions of aging in people over the age of 50 with an average 7.5-year decrease in life span [source: Peri].

That link could have a huge impact on our population. In 2010, people over age 65 comprised some 13 percent of the U.S. population. That's about 40 million Americans, a number expected to increase to 55 million by 2020. And the number of people ages 85 and older will increase from 5.7 million to 6.6 million over the same period of time [source: Administration on Aging].

But it's not just the media that propagates negative stereotypes about the elderly. These blanket assumptions arise in part from what social scientists call the psychologist's fallacy: judging another person's state of mind based on your own experiences and perspectives [source: Blackwell]. For example, a 40-year old may think his 75-year-old mother will be happy to move in with his family after his father has died. She won't have to worry about keeping up a big, empty house -- and you know how she loves the grandkids. His mother may see it as losing her home and independence, and being tied down with babysitting.

On the other hand, the 40-year-old and the 75-year-old might find a lot of common ground -- they'll never know until they sit down and talk about it.

Over the next 10 pages, we'll try to clarify some of the misconceptions surrounding aging. Our first stereotype looks at what retiring means for today's older adults.