Can a toothbrush fight periodontal disease? 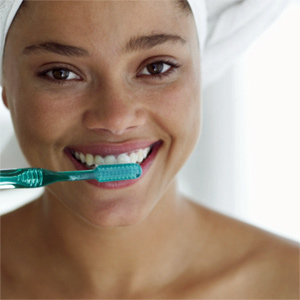 A toothbrush should be part of your periodontal disease-fighting arsenal, but not the only tool.
Stockbyte/Thinkstock

You've been diagnosed with periodontal disease, and your dentist says if you don't do anything about it, you could eventually lose your teeth. It might be great to imagine you could solve this problem with a toothbrush, but unfortunately, that's not the case. At least, not entirely.

In fact, a leading expert on periodontal disease has a simple answer to the question of whether toothbrush alone can offer such a solution.

"The answer, unequivocally, is no," says Dr. Robert M. Pick, a clinical associate professor of surgery at Northwestern University's medical school and a spokesman for the American Dental Association. "A toothbrush by itself is ineffective in fighting periodontal disease."

Periodontal disease, more commonly known as gum disease, is an infection. Like everyone else, you have bacteria in your mouth that form a film called plaque on your teeth. If plaque is allowed to hang out on your teeth too long, the bacteria in it can irritate and inflame the gums, a condition known as gingivitis. The most basic form of periodontal disease, gingivitis can cause the gums to redden, swell and bleed easily. Generally, good oral hygiene can treat this condition.

However, if you don't do anything to keep gingivitis in check, bacteria may multiply, allowing the disease to progress to periodontitis. In this more severe condition, spaces, or pockets, form between your gums and your teeth and become infected. The infection continues to spread below the gum line, and your body's immune response to it can eventually erode the bone and tissue that keep your teeth in place. With periodontitis, you're facing potential tooth loss -- and you may have to take serious measures to fight it.

"Floss and a brush can only go so far below the gum line," Pick says.

If the disease gets bad enough, you'll need to have a type of deep-cleaning called scaling and root planing, at the very least. This helps get rid of bacteria around the gums. If your gums are still unhealthy after that, though, you might need surgery. The surgical treatments now available include procedures to regenerate bone and soft tissue and one that involves placing the gums back over reconstructed roots. Periodontists can also use soft tissue grafts to even out the gum line.

But using invasive surgeries to treat periodontal disease is usually a last resort. If you identify the condition in its early stages and take the right steps, you'll probably never have to get that far. Pick recommends a four-pronged approach to fighting periodontal disease, including using a toothbrush, dental floss and electronic toothbrush and getting professional cleanings every three months from a dentist or periodontist.

So, a toothbrush should be part of your disease-preventing arsenal, but not the only one.

"A brush goes so far. Floss with it goes exponentially further," Pick says. "Floss absolutely has to be there."

Hand, Foot and Mouth Disease
What is a dental scaler?
Can big teeth be shaved down?