Can you use toothpaste and mouthwash with fluoride? 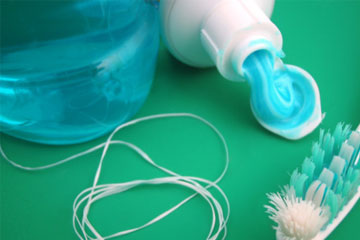 The American Dental Association doesn't specifically recommend using mouthwash in your daily routine, but it does acknowledge its benefits.
Hemera/Thinkstock

As soon as we're old enough to go to the dentist, we're introduced to the American Dental Association's (ADA) fundamental rules of good oral health: Brush at least twice a day with a fluoride toothpaste; floss to clean between your teeth; eat a diet rich in fruits and vegetables; and limit sugary foods and drinks that can encourage bacteria and tooth decay [source: ADA].

But what about mouthwash? Mouthwash, sometimes referred to as mouth rinse, is a popular item in many people's medicine cabinets, but can you safely use toothpaste and mouthwash that both contain fluoride in your oral care routine to effectively prevent cavities? The ADA doesn't specifically recommend using mouthwash in your daily routine, but it does acknowledge its benefits. But first, let's look at why brushing and flossing is essential to good health.

Your mouth is in a constant battle with bacteria. While much of the bacteria in your mouth are harmless, regular brushing, flossing and dental visits help remove the food and bacteria that can break down your teeth. Improper tooth care, however, allows for a buildup of bacteria, which lodges itself in your gums. This is known as plaque. Plaque buildup on your teeth can lead to gingivitis, or gum (periodontal) disease [source: The New York Times]. It can also lead to cavities, which can affect children, teens and adults equally.

In the 1940s, the U.S. government began allowing states to add fluoride to its water supply to compensate for areas where people were not able to get proper dental care, and about 64 percent of Americans drink fluoridated water today, but since the 1980s, dentists have noticed that children began developing white spots on their teeth, known as fluorosis, a sign of ingesting too much fluoride. In 2011, the U.S. government said it would begin recommending that states reduce the amount of fluoride added to their water supplies [sources: Hughes, NIDCR]. Due to levels of fluoride in water, toothpaste and mouthwash today, it seems that it's possible to have too much fluoride.

While water supplies, toothpaste and mouthwash all contain fluoride, mouthwashes contain a minimal amount of fluoride and won't put your fluoride intake over the top [source: ACT]. Mouthwash can bring additional benefits to preventing both cavities and bacteria-induced gingivitis, but given the variety of mouthwashes available, it can be tough to figure out which one is best for you. Here's a breakdown [sources: Haiken, Seward]:

The ADA does not recommend mouthwash or rinses for children younger than age 6 because many of them contain alcohol. Children are more prone to swallow mouthwash instead of just swishing it around and spitting it out. Another concern is that mouthwash may stunt the natural ability of saliva to help wash bacteria away from teeth. Since alcohol is a drying agent, using an alcohol-based mouthwash will actually dry out your mouth. This can prevent your mouth from producing saliva, and the cycle of natural antibacterial removal is stopped [source: 1-800-Dentist]. Ask your dentist which toothpaste and mouthwash combination will be the most beneficial for your mouth.

5 Reasons Why Flossing Is Extremely Important
Do young kids need to floss and use mouthwash?
5 Plaque Removers That Really Work

What in the World Are Tonsil Stones?
Teeth Veneers
Coping With Dental Emergencies Pain and Broken Teeth