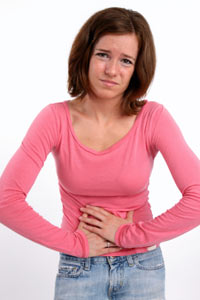 Cramps aren't uncommon before or during a girl's period, but they can usually be treated with some pain relievers and maybe a hot bath.
©iStockphoto/Stockphoto4u

Anywhere from six months to three years after the onset of puberty (as marked by breast budding), a girl will experience her first period, or menarche. This is when the uterus sheds its lining, which is accompanied by blood.

Between the time the breasts begin to develop and menarche, a girl will likely have a significant growth spurt, gaining several inches in height (as much as 4 or more inches (10.2 centimeters) in a year) [source: Moses]. A girl who has entered puberty will also gain weight. There may be a connection between excess body weight, the early onset of puberty and the onset of menstruation because the body basically perceives that the nutritional needs for a pregnancy can be met.

Several months before menarche, girls will begin noticing white vaginal discharge. This is normal and is essentially the precursor to the first period, as the uterus develops and begins discharging fluid.

From the point of first menstruation, a girl's periods will likely be irregular for several years. Even when the menstrual cycle is regular, girls may have cycles as short as 15 days or as long as 40 days. The amount of her menstrual discharge may also vary from month to month, but on average a girl will lose about a quarter-cup of blood during her period. It can last from three to 10 days, with heaviest flow usually occurring on the days two and three. If a girl feels like she's having an abnormally heavy period, she should contact her doctor.

Cramping, pain and even nausea occur very commonly during menstruation. This is a result of the uterus contracting to expel its lining. There is no single method of relieving the cramping that works for everyone, so girls will have to experiment with various combinations of rest, activity, diet and medication until they find something that works best for them.

Girls may also experience symptoms of premenstrual syndrome (PMS) such as aches, pains, bloating and moodiness. Over-the-counter pain relievers, as well as restricting caffeine and salt from the diet, may help alleviate these symptoms. (To get the whole story on PMS, give How PMS Works a read.)

Ovulation doesn't begin automatically with menarche -- it can be another two years before a girl is capable of conceiving a child.