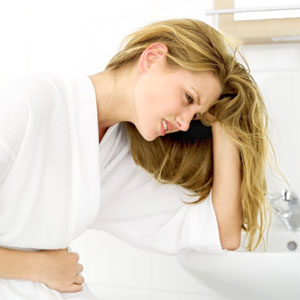 Symptoms of PMS such as headaches and fatigue can be debilitating and interfere with everyday life.
Stockbyte/Thinkstock

Every month like clockwork, some women come down with a strange collection of symptoms. They may become irritable, snapping at their family and friends without the slightest provocation. They may forget where they put their car keys and have trouble paying attention during meetings at work. They may crave chocolate or find themselves sneaking a few pieces of pizza after their children have gone to bed. Or they may suddenly hate the way they look because they feel bloated and their hair looks oily and lifeless.

We are quick to give these symptoms a label: premenstrual syndrome, or PMS. But what is PMS? Some people dismiss it as "that time of the month" -- an excuse that women give in order to eat tons of chocolate and get away with acting a bit cranky.

But doctors recognize PMS as a real medical condition, with real physical and psychological symptoms. For many women, the symptoms are debilitating enough to interfere with their lives.

Premenstrual Syndrome (PMS) is a set of hormonal changes that trigger a wide range of physical and emotional symptoms in women. These symptoms can range from anger and irritability, to abdominal cramping and breast tenderness, to food cravings. PMS generally occurs between 7 to 14 days before menstruation (a woman's monthly bleeding, or "period") and then stops once menstruation begins. It can only occur during a woman's childbearing years -- after menopause, it stops.

Up to 40 percent of menstruating women experience symptoms of PMS [ref]. In most of these women, PMS is nothing more than an annoyance. But in about 5 percent of women, the symptoms are debilitating enough to interfere with daily life.

In this article, we'll discover how doctors identify PMS, learn the underlying causes of this ailment and find out how women who suffer from it can find relief.

There are more than 150 different symptoms associated with PMS, so it is often difficult to diagnose. Although there is no real test for PMS, doctors will do tests to rule out other conditions that cause similar symptoms. When a woman's symptoms coincide with her menstrual cycle, and she tests negative for other conditions, PMS is usually determined to be the cause of her symptoms. Keeping a monthly diary of symptoms is helpful to confirm the diagnosis.

Some conditions to rule out when diagnosing PMS:

There are more than 150 physical and psychological symptoms associated with PMS. These symptoms can vary from mild to severe, from person to person and from cycle to cycle.

In the next section, we'll look at some of the factors that may contribute to PMS.

Scientists don't know exactly why women get PMS or why some women experience it more severely than others. But they believe that it stems from a combination of hormonal changes, genetics, nutrition and psychological factors.

Hormones are one of the most studied aspects of PMS's origins. PMS occurs near the end of a woman's menstrual cycle, within seven to 14 days before menstruation. During this cycle, which takes about 28 days, an egg matures and is released from the ovaries for possible fertilization. The hormones estrogen and progesterone play a big part in the menstrual cycle.

At around five days into the menstrual cycle, the ovaries release the female hormone estrogen. This hormone helps thicken the uterus, which will nourish an embryo if conception occurs. At around 14 days into the cycle, the egg is released in a process called ovulation. After ovulation, the last (luteal) phase of the menstrual cycle begins, and PMS symptoms tend to emerge. During this phase, the ovaries increase production of estrogen and begin producing progesterone to prepare the uterus for a possible pregnancy. If the egg is not fertilized, production of estrogen and progesterone drops. This hormonal drop causes the lining of the uterus to die and slough off, leading to menstruation. Once menstruation starts, PMS symptoms stop with a day or two. (See How Menstruation Works to learn more about the menstrual cycle.)

Researchers believe that the following neurotransmitters are affected by estrogen and/or progesterone during the menstrual cycle and may lead to some of the symptoms of PMS:

Whether symptoms are influenced by increased or decreased levels of estrogen and progesterone is a matter of some debate. Studies routinely produce conflicting results. Some researchers believe that the key to PMS symptoms lies in the balance between these two hormones during the menstrual cycle.

Why are some women more susceptible to PMS than others? Some researchers believe that the answer has to do with heredity. Women whose mothers and sisters have PMS are more likely to have it themselves, although studies have yet to prove the genetic link. .

We don't know exactly how diet impacts PMS. But some research has shown that increasing complex carbohydrates before menstruation helps increase the levels of the neurotransmitter serotonin, a deficiency of which has been linked to PMS-related depression. Although complex carbohydrates (such as those found in whole grains and vegetables) are good to eat during PMS, simple carbohydrates (such as those found in sugary snacks and white bread) can actually increase water retention, irritability and other PMS symptoms.

Experts also recommend that menstruating women take vitamins, especially a daily multivitamin containing folic acid (which is essential for the growth of the fetus should conception occur) and a calcium supplement with vitamin D (which helps bones stay strong and may also help alleviate PMS symptoms). Some researchers think Vitamin B6 may ease symptoms, particularly depression, but its effectiveness has not been clinically proven, and very high doses (500 mg to 2,000 mg daily) can cause nerve damage.

Dieticians sometimes recommend that women who are experiencing PMS eat several small meals throughout the day rather than three big meals. Eating a lot of food at once can cause blood sugar to swing up and down, which some people believe might exacerbate PMS symptoms.

Experts say that certain foods should be avoided:

Women should also avoid nicotine because, in addition to its other health risks, it can affect PMS symptoms much like caffeine.

A 2005 study found that women who ate a diet rich in vitamin D and calcium had less of a risk of developing PMS than women who didn't eat these nutrients. To see a benefit, the women in the study had to eat at least 1,200 milligrams of calcium and 400 IU of vitamin D each day. Researchers don't know exactly why vitamin D and calcium warded off PMS symptoms, but they say it may have something to do with calcium's effect on the hormone estrogen during the menstrual cycle.

Some researchers believe that a deficiency of calcium and magnesium (which affects nerve-cell communication) or low blood sugar (hypoglycemia) can trigger PMS symptoms, but these links have yet to be clinically proven.

In addition to dietary changes, milder PMS symptoms can be alleviated by simple lifestyle changes, primarily through exercise and reducing stress.

Exercise During a workout, levels of chemicals called beta-endorphins rise. These chemicals positively impact mood and behavior. Experts say that exercising at least three times a week can reduce anger and depression and fight stress during PMS.

Stress Reduction Although stress doesn't cause PMS, it can worsen its symptoms. Relaxation techniques such as meditation and yoga are often effective in relieving stress.

Medications When diet, exercise and stress reduction aren't enough to alleviate symptoms, medications may be needed. Over-the-counter medicines, such as those containing acetaminophen (Tylenol) and ibuprofen (Motrin), can relieve cramping and other minor aches and pains. Some medications are marketed specifically to women experiencing PMS symptoms. These medications, which include Midol and Pamprin, typically include a combination of aspirin or acetaminophen for pain plus diuretics. Diuretics prevent water retention to relieve bloating. For women with PMDD (see below), antidepressant drugs such as sertraline hydrochloride (Zoloft) and fluoxetine (Prozac, Sarafem) can alleviate depression. In severe cases, birth control pills can be used to stop ovulation completely.

For more information on PMS and related topics, check out the links on the next page.

The irritability, bloating and food cravings that occur with PMS cause many women great discomfort each month. But anywhere from 3 to 5 percent of menstruating women experience a more severe form of PMS, called Premenstrual Dysphoric Disorder (PMDD). While experts often debate the validity of the distinction between PMS and PMDD, it is nonetheless diagnosed in a small number of cases.

To be diagnosed with PMDD, a woman must experience at least five PMS symptoms during the period between ovulation and menstruation, and one of the five symptoms must be:

The other symptoms can include:

Some doctors recommend a variation of the antidepressant drug Prozac, called Sarafem, to treat some of the emotional symptoms of PMDD.