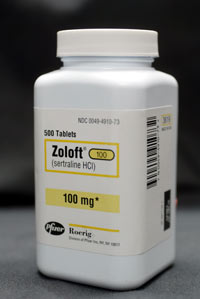 Tourette's patients who also have OCD may be able to take antidepressants like Zoloft.
Joe Raedle/Getty Images

There is no cure for Tourette's, but there are several ways to control it. Treatments include behavioral therapy, daily medications and deep brain stimulation, and the choice is dependent on how much the syndrome affects the person's life.

Behavioral changes are indicated for patients with mild symptoms, but this treatment should be attempted before or in conjunction with other therapies. Common behavioral changes include relaxation techniques that relieve stressors and may help reduce the frequency of tics. Cognitive behavioral therapy can be helpful in patients suffering from both Tourette's and obsessive-compulsive disorder. This is a psychotherapy that works by modifying assumptions, beliefs and behaviors in an effort to influence disruptive behaviors.

Habit reversal therapy is a type of behavioral therapy that has been shown to be successful in patients suffering from tics. The therapy has five components: awareness training, competing response training, contingency management, relaxation training and generalization training. Experts believe that the competing response part is the key to the therapy's success. A patient suffering from tics is trained to better identify when a tic is going to occur. When he has an urge to tic, he performs a competing response -- usually an action that uses the same muscles as the tic would use. For example, if he suffers from a shoulder-shrugging tic, a competing response would be to stretch the neck muscles and push the shoulders down.

Most Tourette's patients need medication only if and when their symptoms are severely interfering with their daily lives. Doctors usually avoid medication for several reasons: side effects, the large variation in the severity of a patient's tics, and because the majority of tics can be controlled with support and awareness. While there are no medications specifically for the suppression of tics, doctors can prescribe several types of medication, with different degrees of success, for the control of Tourette's symptoms. The most commonly used are antipsychotics like pimozide or haloperidol.

Antipsychotics work by blocking receptors, including dopamine receptors, inside and outside the central nervous system. Many scientists believe that excessive levels of dopamine in the brain could contribute to Tourette's. So, dopamine-receptor blockage should help to reduce the amount of dopamine in the brain and, therefore, reduce some symptoms. However, doctors often avoid these drugs because of their possible side effects, many of which can be worse than Tourette's itself. They include severe muscle spasms throughout the body, drooling, tremors, extreme restlessness, sexual dysfunction, seizures and even the development of breasts in male patients.

If a patient requires medication, doctors should consider any concurrent condition (such as OCD or ADHD). A patient suffering from both Tourette's and ADHD may benefit from stimulants like Ritalin. A Tourette's sufferer who also has OCD may benefit from antidepressants known as SSRIs, like Prozac and Zoloft.

Finally, if a patient has pronounced, debilitating symptoms and has not gotten relief from the treatments mentioned above, deep brain stimulation (DBS) may be an option. In DBS, surgeons implant tiny electrodes into the brain to act like a pacemaker. The electrodes are connected to wires from a small battery pack installed in the patient's chest. This pacemaker works much like a pacemaker that stimulates the heart, but it sends electrical impulses to specific areas in the brain. It usually targets the thalamic region, which controls movement, and blocks abnormal firing of neurons. This type of treatment has successfully treated other movement conditions, like Parkinson's disease. However, DBS is still considered experimental in patients with Tourette's syndrome due to the small number of patients who have received the surgery and the even smaller number who have found relief from it.

For more information about Tourette syndrome, check out the links below.