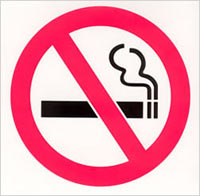 Smoking is a no-no for those about to undergo ­gastric bypass surgery.
Image courtesy of the South Carolina Office of Human Resources

Before a gastric bypass surgery, patients need to make several changes to their lifestyle. Doctors may recommend smaller meal portions and restrict some foods. Doctors may also encourage smokers to quit or to reduce the number of cigarettes they smoke. Smokers should quit at least two weeks before surgery, but six to eight weeks prior to surgery is ideal. Quitting smoking is important because smokers heal more slowly than nonsmokers, which can result in complications after the surgery, including infection. In addition, smokers are at a higher risk for breathing problems while under anesthesia.

While support groups are not a requirement, patients do need to prove that they have a strong support system before being seriously considered for surgery. This step of the screening process is essential because many obese patients eat for emotional reasons rather than for nourishment. In addition, after gastric bypass surgery, a patient may be more prone to psychological factors such as depression. Therefore, in order to ensure long-term success, many patients opt to attend support groups both before and after the surgery. Patients may also be asked to see an endocrinologist to rule out glandular or hormonal imbalances.

Patients receive antibiotics before the surgery and often up to 24 hours after the surgery in an effort to minimize the chance for infection. A common complication of any hospital patient that is lying in bed for long periods of time is DVT, or deep vein thrombosis. The inactivity of the legs allows blood clots to form, which can then travel throughout the body and possibly result in a stroke or a pulmonary embolism. In order to prevent this, doctors usually prescribe a pre-operation regimen of compression stockings along with a drug that thins the blood and keeps blood clots from forming. As soon as six hours after surgery, a patient should begin walking around in order to prevent DVT.

Next, we'll look at the exact procedure used in gastric bypass surgery.