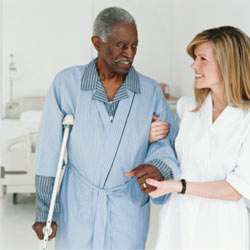 American boomers are expected to live longer than any previous generation.
Stockbyte/Thinkstock

The year 2011 marked when the first wave of boomers hit 65 years of age, and on average they can expect to live to the age of 83 [source: Harvard School of Public Health].

American boomers are expected to live longer than any previous generation. In addition to living longer, boomers are also likely to remain independent and live in their own homes longer, as well. This will have many implications.

The field of home health care will continue to grow, and providers and policy makers alike will struggle to meet the demand for services. Boomers will also need to stretch retirement savings out longer, and may increasingly turn to financial arrangements such as reverse mortgages in order to secure continued cash flow. Due to the number of boomers who will be collecting benefits, Social Security is expected to begin paying out more than it takes in as early as 2017, and will be the focus of policy debate for years to come [source: Weston].