by Marianne Spoon
Prev NEXT
6 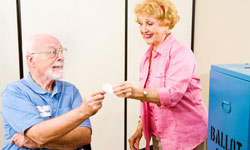 Many baby boomers stay active in their communities by volunteering through church or civic organizations, or at the local polling place.
iStockphoto/Thinkstock

With the majority of boomers hoping to remain in their homes with family nearby, opportunities to deepen their connections to local communities abound. Though many baby boomers say they want to volunteer more, especially after reaching retirement age, actually doing it is another matter [source: Harvard School of Public Health/MetLife Foundation].

According to experts, an individual's activities volunteering peak mid-life, not during retirement, meaning that boomers who aren't already volunteering are unlikely to increase their activities. So far, boomers lack a track record as stellar as their parents, a group called the "greatest generation" because of its civic involvement.

So while volunteering is projected to be popular among boomers by boomers themselves, experts are unsure whether boomers keep their word about wanting to give more time to local causes [source: Harvard School of Public Health/MetLife Foundation]. But based on their tenacity, boomers might defy this preconceived notion as well.

Despite staying active, boomers have preferences for how they spend their down time. Hint: Water's a boomer favorite.