How to Ask a Guy Out 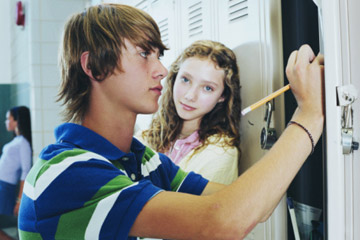 Asking a guy out can be difficult, but it's a vital part of the dating process.
Digital Vision/Thinkstock

Back in the 1930s, cartoonist Al Capp wrote a comic strip called Li'l Abner, in which he introduced a character named Sadie Hawkins [source: Capp Enterprises]. Poor Sadie was not one of the more attractive girls in her town, so her father, in an effort to help her get married, came up with the idea of Sadie Hawkins' Day -- a day when all the unmarried girls could pursue the eligible bachelors in town, and hopefully get themselves husbands.

Over time, the concept of Sadie Hawkins' Day gained popularity in the real world, and schools began holding Sadie Hawkins' Day dances in which the girls could ask out the guys of their choice. While Capp probably never intended for it to become a national phenomenon, Sadie Hawkins' Day gave women a chance to have some control over their social lives. However, while it may be funny in a cartoon, in real life, asking a guy out can be nerve-racking.

Sweaty palms, a dry mouth, butterflies in your stomach -- as a teenager, even if you're the most popular person in school, this is how it usually feels to ask a person out for the first time. Once upon a time, only men had to experience these symptoms, because the responsibility of initiating relationships rested solely with them. Men were the hunters, and were in charge of beginning romantic courtships. However, things have changed over the last few decades, and woman have about as much equality on the romantic playing field as they have anywhere else.

Dating can be stressful, but like anything else, it gets easier with practice. The more you know, the better it will go, so read on for some tips on asking a guy out.

Before you ask a guy out, you might want to take some time to prepare. Here are a few suggestions for doing just that.

Click to the next page for some ways to make that initial connection with a guy.

Before you dive right in and ask a guy out, you may want to test the waters a little bit. The goal is to establish a "click," or some sort of connection with him. Here are few tips for getting started:

Typically, when you make the effort, a guy will respond to you, via conversation, facial expressions or body language, and you'll know how things are going. This will either give you a green light for asking him out or tell you to hold back, use caution and maybe think about it some more.

If you're ready to ask him out, read on. 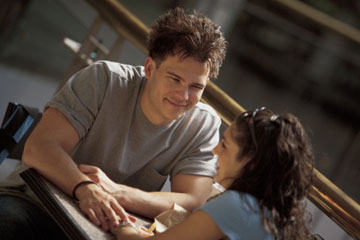 When choosing a place for a first date, be sure to pick a spot where you'll both be comfortable.
Comstock/Thinkstock

Once you've made the connection with a guy, you want to move to the next step -- asking him out. Keep in mind that in this day and age, dating takes many different forms. It may be meeting up at a specified place, just hanging out, or getting together with a group of friends. You don't want there to be confusion about whether you're just friends or something more. By asking him out instead of just hoping you show up in the same place, you minimize that confusion.

So, how do you do this? Consider asking him at the end of a great conversation you've just had. You've been talking, teasing, having a laugh or two -- now go for it! There's a lot to be said for being direct. He'll appreciate it, because there's no hidden meaning to uncover, and most likely, he's been there before and knows the courage it takes. Remember to make eye contact and have a nice transition. Try something like, "You mentioned you liked scary movies, so I was wondering if you'd like to see one this weekend," or "You said you usually hang out at (fill in the blank) after the football game. Would you like to meet up there?"

If no easy transition presents itself, you can always go for the simple, "If you're not doing anything on Friday night, maybe we could get together." The direct approach can be nerve-wracking, but once you've done it, you'll feel good about yourself. After all, you had the chance and you took it!

When you're asking a guy out in person, you'll probably want to do it in a private, one-on-one setting. This is not to say you need to drag him around the building to an abandoned lot, but you don't want to ask a guy out in front of his friends or yours. Asking someone out shouldn't be a spectator sport; there's already enough pressure. There is a much better chance that he will be himself -- and you can be yourself -- if it's just the two of you.

Want a more subtle approach to asking him out? Click to the next page.

The direct approach can be the most nerve-wracking, but it's like pulling off a Band-Aid -- a little sting and then you're done. However, some girls prefer a more indirect route. Here are some suggestions.

Text/e-mail: This relieves some of the pressure of having a face-to-face conversation, which can help, but the trade-off is the delay in getting an answer. Plus, with e-responses, there is no emotion, facial expression or tone of voice. So, once you have your answer, there is no subtext to decipher.

Social network: These days, just about everyone has a Facebook, MySpace or Twitter account, which provide another way to touch base and ask a guy out. Again, the pressure of doing it face-to-face is off, but it's harder to gauge the response and the reaction. Stick to private messages or online chats instead of asking him out on his wall for everyone to see.

Friend of a friend: This approach is tried and true. Have your friend mention to the guy or his friend that you would like to go out. This provides a great shield, but do beware of what's lost in translation. Remember the childhood game, "Telephone"? Someone starts off by whispering a phrase to another person, and it goes around the room until everyone has heard it. However, the initial phrase, "I like ice cream," may turn into "Your mother wears eye cream" by the time the game is over. The only way to ensure the accuracy and intent of a message is to deliver it yourself.

Love letters: Much like the love sonnets of William Shakespeare or the poetry of Lord Byron, the written word is very important in courtship. You probably don't want to sit down and write him a poem or a haiku, but a note slipped to him during class, dropped in his locker or sent via a friend is another way to ask a guy out. Again, you run the risk of the messenger losing the note, so you may want to deliver it yourself. Secret admirers make great characters in movies and books, but in real life, it's nice to know who's doing the asking.

Have a Date in Mind

When you're asking a guy out, you want the date to be fun, something you both like to do, and preferably something casual and relaxed. This makes it easier for you to ask and easier for him to say yes. So, what are some ideas?

Concerts and sporting events are fun, casual dates, and typically, they involve common interests -- be it Lady Gaga or professional hockey -- so afterward, you'll have plenty to talk about. Another option is a school event, such as a football game, a dance or even a study date; this a place where you already have common ground. After all, it's not as hard to ask someone to go somewhere if they're already thinking about going. Another date idea is just to go somewhere around town, like a party, a movie or out to grab a bite.

Some words of caution when choosing a date location:

A way to lessen the tension of dating, and also put both teens and parents at ease, is group dating. This is when guys and girls meet out somewhere fun and socialize in a large group setting. You can mingle, getting to know different people in an up-close and personal setting, but you can keep it casual. Just beware: You could end up in a situation where several people are interested in the same guy, and this might be difficult to manage. Also, an introverted person may not do as well in a group situation as she would one-on-one. So, know what type of scenario works for you. 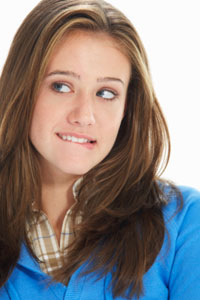 If he turns you down, don't worry -- there are plenty of other great guys out there to choose from.
James Woodson/Photodisc/Thinkstock

Guys, just like girls, have the right to say no, even if you've done your very best job of asking him out. If he does turn you down, try not to take it to heart. There may be a million reasons why he says no -- he may be interested in someone else, or he might think you and he are too different. Maybe he's too shy or taken by surprise when you ask him out, or maybe he's genuinely too busy. Whatever the reason, you want to be polite and friendly in accepting his refusal. It's not the end of the world, and here are a few reasons why:

There really are other fish in the sea. Technically, the teenage years are the early days of your dating career. There are a lot more guys to meet -- some you'll like and others you won't. Don't be disheartened by the response of just one of those little fish.

Get back in the saddle. Don't be afraid to ask someone out again. It will get easier the more you do it, and a lot of guys like the compliment of being asked out and the fact that all the pressure isn't on them.

That which doesn't kill you makes you stronger. This saying may be a bit extreme -- dating really isn't a life or death situation. Regardless of the outcome, be proud that you had the courage to ask a guy out. It shows confidence and strength of character, and the odds are that if you're not afraid to do it again, one of the next guys will say yes.

Read on for more information about dating and relationships.

Why So Many Married Couples Look Alike
How to Approach a Guy You're Interested In
When is the right time to say 'I love you'?