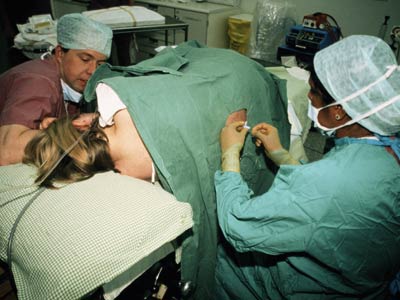 The first stage of labor is known as early labor. It can last up to eight hours while the cervix continues to dilate and efface. Contractions during this stage are generally mild and sometimes described as coming in waves. They can be as long as 20 minutes apart or as few as five minutes apart. During this phase, the mother usually eats, sleeps, moves around and does whatever she likes while waiting for labor to progress. Many women know that they've progressed into the next stage, active labor, because they can't sleep through the contractions.

Contractions during active labor are more intense and painful; they also occur every couple of minutes. This is usually the time when pain relief comes into play.

­If medical pain relief is a part of her birth plan, a woman has a couple of options. A common one is a form of nerve block called an epidural. An anesthesiologist inserts a needle between two vertebrae and then threads in a tube and tapes it down onto the woman's back. An anesthetic, such as lidocaine, enters the cerebrospinal fluid and essentially numbs the body from the breasts downward, and most women feel relief within 20 minutes. They'll have to use a bedpan or be catheterized to urinate, since walking isn't possible.

There's also the option of a walking epidural, or combined spinal epidural (CPE). This uses smaller amounts of the anesthetic used in regular epidurals, along with a narcotic such as morphine. It only numbs the abdominal muscles and works within a few minutes. Some women who have a CPE can walk -- other times, their muscles are too weak or the doctor would prefer that they didn't.

Both types of epidurals have side effects. Sometimes the dura mater, the tough membrane surrounding the spinal cord, is punctured, causing a headache. Sometimes epidurals cause the labor to slow down and labor must be speeded up again using Pitocin.

In addition to nerve blocks, women can have analgesics -- pain relievers -- such as Demerol administered through an IV. Sometimes these have an effect on the baby; it may be drowsy and initially have trouble breathing upon birth. The risk of lasting effects is minimal.

Depending on the options available, laboring women may choose alternative methods of pain relief. Changing positions, kneeling, walking or rocking in a chair can help, as can standing or sitting in a warm shower. Massages, acupressure and acupuncture from a partner or doula might also soothe pain.

During active labor, the cervix generally dilates about 1 centimeter an hour. When contractions become the most intense, they may be only 30 seconds apart. During the transition phase, the cervix fully dilates. Active labor usually lasts three to six hours, and the transition phase about an hour. Delivery is imminent, and without drugs to relieve the pain (which can still be asked for and administered during this phase), the woman may have a chaotic mix of sensations and feelings. Women who have had epidurals are usually calmer because of the loss of sensation. Those who are going for a nonmedicated childbirth may feel sick, have chills and shake (which can also happen with an epidural). The urge to push becomes overwhelming.

But it doesn't always happen this way. Before we get to delivery, let's take a look at some complications that can occur during the stages of labor.