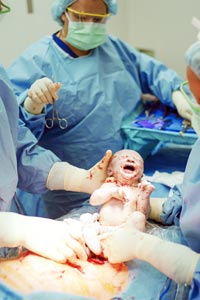 A C-section is sometimes the only option to safeguard both the mother's and the baby's health.
Luca Trovato/Stone/Getty Images

­Sometimes things don't progress as they should. Maybe the doctor feels the baby's head is too big to fit through the vaginal opening. The baby may not be moving down into the birth canal or isn't in the right position. Vaginal deliveries are usually possible with a breech position in which the baby's buttocks are pointed downward instead of his head, but sometimes the baby is lying horizontally. Most medical professionals don't like to turn the baby manually because it can trigger premature labor; babies in these positions in the weeks leading up to the due date often move into position by themselves. But if not, then a Cesarean or C-section becomes the only way to get him out safely. (Read How C-sections Work for the full story.)

The baby's heart rate becoming erratic or slowing down indicates fetal distress. This can be caused by a number of things, including having the umbilical cord wrapped around the neck, which means that the baby isn't receiving enough oxygen and must be delivered as soon as possible. The birth plan usually goes out the window at this point because a life is in danger. Often this means a C-section. If the woman has had an epidural, it can be turned up and provide enough nerve blockage for pain relief. If not, an anesthesiologist can administer one or she may be put under general anesthesia if there's not enough time.

If the situation doesn't warrant a Cesarean section, other methods can be used to extract the baby. An episiotomy is one way. Forceps, which look like tongs, were once also commonly used to guide the baby out of the birth canal when it appeared that he or she wouldn't fit through otherwise, but they occasionally caused injury to the baby's soft skull. Today they're rarely used -- doctors are more likely to use a vacuum or order a Cesarean. Vacuums (which look like small suction cups with plungers that attach to the baby's scalp) are often used when the baby is slightly higher in the birth canal. The risk of injury is lower than with forceps, although the baby may have a swollen spot on its head for a little while as a result. Episiotomies were often done in conjunction with forceps deliveries, but they aren't usually necessary with vacuum extractions.

These are examples of what can go wrong, but many times, things go exactly like they're supposed to. Let's take a look at what happens when it's time to push.