The Role of Lungs (Fei) in Traditional Chinese Medicine 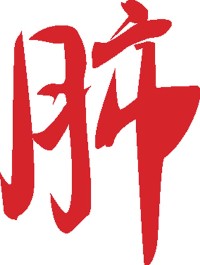 In traditional Chinese medicine, the lungs are considered the "tender organ."

The lungs are considered the "tender organ" in traditional Chinese medicine because they open directly to the external environment and are usually the first internal organ attacked by external pathogens (disease-causing organisms) such as bacteria or viruses.

Symptoms of imbalance in the lungs include cough, asthma, phlegm, chest pain, bloating, loss of voice, and nosebleeds.

The Functions of the Lungs in Traditional Chinese Medicine

The lungs control breathing. This important function closely parallels the Western understanding of the organ. In addition to controlling inhalation of oxygen and exhalation of carbon dioxide, the lungs -- along with the spleen -- are seen as the source of postnatal qi, the actual vitality of a person. (The kidneys are considered the source of prenatal qi, the constitution.)

The concept of postnatal qi is important because people with a weak constitution don't have to be consigned to a lifetime of fatigue or illness. Through breathing exercises such as qi gong, a person can enhance his or her vitality through the qi of the lungs. The lungs control the qi of the entire body.

Since the lungs transform inhaled air into qi, they have an important influence on the functional activities of the entire body. When lung qi is strong, breathing is normal and the body has sufficient energy. Weak lung qi, on the other hand, deprives the other organs and body tissues of energy, leading to shortness of breath, weak voice, and general fatigue.

The lungs control body fluids in the lower part of the body. An organ of the upper body, the lungs assist in moving qi and body fluids to the lower portion of the body. When this descending action of the lungs is impaired and normal qi flow is disrupted, cough and shortness of breath may occur. Also, fluids can collect in the upper body, resulting in edema (severe water retention) and difficulty in urination.

The lungs govern body hair and skin. This principle refers to the lungs' function of dispersing moisture to the skin, maintaining its suppleness and elasticity. The body hair and pores are also considered an integral part of the lungs' defensive system: They act as the boundary between the outer environment and the interior of the body, protecting the body from the external environment.

The qi that flows just under the skin is called wei qi and is considered the body's immune system. When the wei qi is strong, the body is able to fight off external pathogens.

Clinically, the relationship between the lungs and the pores is seen in persons who frequently catch colds: they often complain that they have an aversion to wind, and they break into a sweat when they aren't feeling warm. These symptoms are due to an impairment of the lungs' control of the pores, resulting in the easy access to the body's interior by external pathogens.

The lungs open to the nose and control the voice. When lung qi is healthy, the sense of smell is acute, the nasal passages remain open, and the voice is strong. When lung qi experiences dysfunction, the person may experience symptoms of nasal congestion, excessive mucus, an impaired sense of smell, and a weak or hoarse voice. As most of us have experienced, a breakdown in energy throughout the body often follows these symptoms.

Go to the next page to learn about the role of the spleen in traditional Chinese medicine.