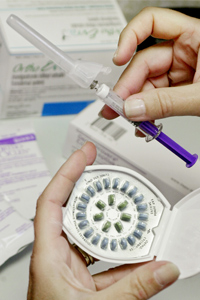 Birth control, also called contraception, is the voluntary prevention of pregnancy. A variety of methods are available. Couples who use no contraceptive method have an 80 to 90 percent chance of achieving pregnancy over a 12-month period, provided that they have no underlying infertility problem.

In this article, we will cover all the major forms of birth control.

A condom is a thin rubber or synthetic sheath that a man fits over his erect penis just before sexual intercourse. A condom used alone is about 70 percent to 90 percent effective, depending on the care with which it is used.

Several problems can occur with the use of the condom, however. Tiny holes or tears may develop in the sheath, causing leakage of sperm. Also, when the penis is withdrawn from the vagina after intercourse, the condom sometimes breaks or partially unrolls inside the vagina, releasing sperm.

However, a latex condom used regularly with a spermicide is approximately 95 percent effective in preventing pregnancy. Condoms have the great advantage of being readily available in any drugstore without a prescription. Latex condoms also have the advantage of helping to prevent the spread of many types of sexually transmitted diseases, including acquired immunodeficiency syndrome (AIDS).

The diaphragm is a molded rubber cap that the woman places inside the vagina to cover the cervix. The diaphragm blocks sperm from entering the uterus. It must be inserted before intercourse and left in place for six hours afterward. Diaphragms are available in different sizes and must be fitted by a physician. When used with spermicides, diaphragms are very effective, with only about a 3 percent chance of pregnancy.

Spermicide is a chemical foam, cream, suppository, or jelly applied to the woman's vagina to kill sperm. A spermicide should be used in conjunction with a condom or diaphragm; used alone, a spermicide is only 75 to 85 percent effective. Some disadvantages of a spermicide are that it must be applied before each individual act of sexual intercourse, it has chemical odors, and it may cause irritation of the vagina. A chief advantage is that spermicides are readily available at drugstores without a prescription.

The contraceptive sponge is a disposable, spongelike device saturated with spermicide. The sponge is inserted into the vagina up against the cervix, where the device works by continuously releasing spermicide for up to 24 hours. Additional applications of spermicide are not necessary, even for multiple acts of intercourse. There are other advantages as well: The sponge is available without a prescription; unlike a diaphragm, the sponge does not have to be fitted; and the sponge can be inserted ahead of time, which allows greater spontaneity in sex. The sponge has been found to be about 85 percent effective.

Some side effects are associated with the use of the sponge. Cases of local irritation or allergic reaction have been reported; however, these have been mild and infrequent. There is also concern that the sponge could become a breeding ground for infection, especially if used improperly. You should consult your doctor about the contraceptive sponge and its proper use before trying this method of birth control.

There are several more birth-control methods to consider. We'll start with the IUD, in the following section. 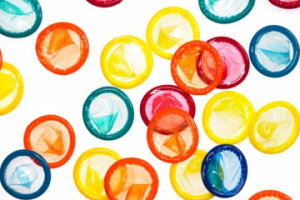